Tasmanians in the AFL: Finals Week 2 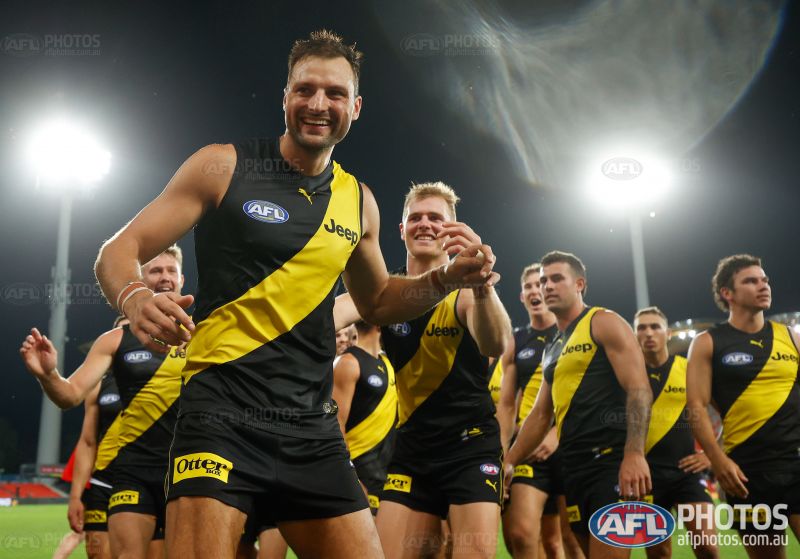 Tasmanians in the AFL: Finals Week 2

Toby Nankervis helped drive Richmond’s victory and Jake Kolodjashnij got some revenge for earlier in the year.

Hamish Spence recaps how our Tasmanians faired across the Semi-Finals.

Jack Riewoldt (TSL Club: Clarence) was quiet against the Saints, finishing with just four disposals, two marks, three tackles and two inside 50s. He took attention away from Tom Lynch, but will need to lift for this week’s cutthroat Preliminary Final.

Toby Nankervis (TSL Club Represented: North Launceston) was one of Richmond’s best on Friday, polling one AFLCA coaches vote for his game. While Rowan Marshall edged him in disposals and hit outs, Nankervis had more of an impact around the ground and helped the Tigers get on top through the middle. He finished with 14 disposals, 15 hit outs, four clearances, three marks (two contested), four tackles, four intercept possessions and seven score involvements. He has a tough task against Port Adelaide this Friday, as Scott Lycett and Peter Ladhams will likely double team him.

Jake Kolodjashnij (TSL Club: Launceston) was good against Collingwood, finishing with 13 disposals, four marks, one clearance, one inside 50 and one intercept possession. After having five goals kicked on him by Jordan De Goey earlier in the season, Kolodjashnij managed to keep him goalless on Saturday night. He could cop the dangerous match-ups’ of Cam Rayner or former teammate Lincoln McCarthy in this week’s Preliminary Final.

Brody Mihocek (TSL Club: Burnie) had a tough night on Saturday, finishing with six disposals, two marks, two tackles, one inside 50 and two goals. Every Collingwood forward struggled due to the lack of service, but Mihocek still managed to be the Pies’ only multiple goalkicker with his two goals in the last quarter (his first against Geelong). It’s still been another strong campaign from Mihocek, he’s finished as Collingwood’s leading goal kicker for the second year in a row and is waiting for a well-deserved new contract over the off-season.