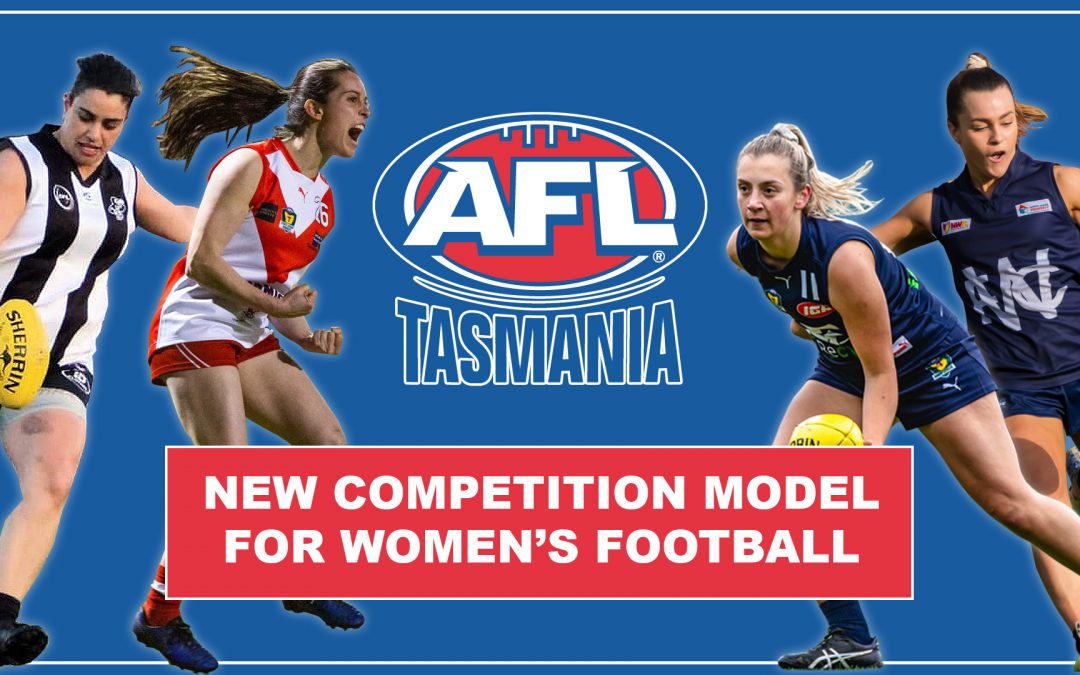 AFL Tasmania has announced a new competition model for women’s football as part of the state’s
commitment to growing and strengthening the game.

Despite the challenges posed since the onset of the COVID-19 pandemic, there will be more teams and more opportunities for women to play football in Tasmania this year and beyond. This comes after football experienced a substantial increase in overall participation at junior and senior female levels from 2017-19 before COVID-19 disrupted the game in 2020.

Strengthening the female football talent pool and growing participation remain key strategic priorities for the game, and registration numbers are strong going into 2021.

The Tasmanian State League Women’s (TSLW) will not go ahead in 2021 due to an insufficient number of teams (three) committed to compete in a statewide women’s competition. As a result, remaining clubs Clarence, Glenorchy and Launceston will move to participate in regional competitions in the Northern Tasmanian Football Association Women’s (NTFAW) – Launceston – and the Southern Football League Women’s (SFLW) – Glenorchy and Clarence. The new format will bring to life local rivalries throughout the home and away season while also pitting region against region. The focus is to uplift and build a greater level of talent through more clubs across three vibrant regional competitions.

The 2021 season will culminate in the statewide Finals Series that will showcase the three league premiers playing each other in a battle to be crowned Tasmania’s best women’s team. There will also be a Tasmanian Women’s All Star Representative Series contested between the SFLW, NTFAW and North West Football League Women’s (NWFLW) representative teams. A Tasmanian All Stars team will be selected to acknowledge and celebrate the state’s top performers. The All Star Series will be live streamed with statistics provided to cater to AFLW recruiters.

This model gives women’s football in Tasmania the best chance to prosper, while still providing a platform for current players who are aspiring to play at the elite level.

Head of AFL Tasmania, Damian Gill, said: “we are excited by these changes and building on the
incredible growth we’ve seen in women’s football at junior and senior levels in recent years.

“Like all sport around Australia, community football in Tasmania was impacted by the COVID-19 pandemic during 2020, but the participation numbers we’re seeing in female football for the year ahead are really encouraging.

“Interest in the game at the junior level is huge and the future of female football in Tasmania looks very bright.

“While disbanding the TSLW competition was not an easy decision, we need to facilitate sustainable competitions. The new model means there will be more senior women’s teams than ever before with the SFLW and NTFAW both expanding, and it will give more players the opportunity to compete with the best female footballers in the state each week.

“We will also see representative football take centre stage with the very best talent from the NTFAW, NWFLW and the SFLW showcased in a Tasmanian Women’s All Star Representative Series in June.

“As part of our commitment to long-term future of women’s football in the state, we are seeking nominations for a new female football advisory group, to feature voices from right across the game. Those interested can find out more and apply by contacting this link.”

AFL General Manager of Women’s Football, Nicole Livingstone said: “Over 600,000 women and girls now play football across the country and participation numbers in Tasmanianwomen’s football boomed in the latter part of last decade. It’s wonderful to see so many girls involved in the game at a junior participation level, regardless of whether they’re playing for fun, to be active or those who aspire to play at higher levels.

“While we confronted unexpected challenges in 2020, the momentum behind the women’s game in the state has meant that we have a really strong foundation with which to keep growing female football. This new competition model aims to help build out the talent base and enhance the overall standard for the best players.

“At the elite level it’s been fantastic to see players like Mia King and Daria Bannister progress through the state pathway system and excel in the NAB AFL Women’s competition. We have incredible role models setting an example for girls across Tasmania, and I’m confident we’ll see even more Tasmanian women coming through the system and competing with the country’s best in years to come.”

• New competition model for female football across the state means there will be more senior
women’s teams than ever before with the SFLW and NTFAW both expanding
• The state’s finest Under 19 women’s talent will compete in the NAB League against
Victoria’s very best
• AFL Tasmania in partnership with North Melbourne Football Club will look to provide opportunities for the state’s next wave of aspiring senior talent to play VFLW
• A female football advisory group will also be assembled to help guide the evolution of female football in the state moving forward
• Emphasis on ensuring the women’s representative football program gives the state’s best
players a chance to showcase and develop their abilities
• Commitment to continuing to grow participation at all levels and getting numbers back to pre-COVID levels, to build on the incredible growth in the game between 2017-19
• Pathway programs for the best Tasmanian junior players to compete in AFLW U17 and U19 events 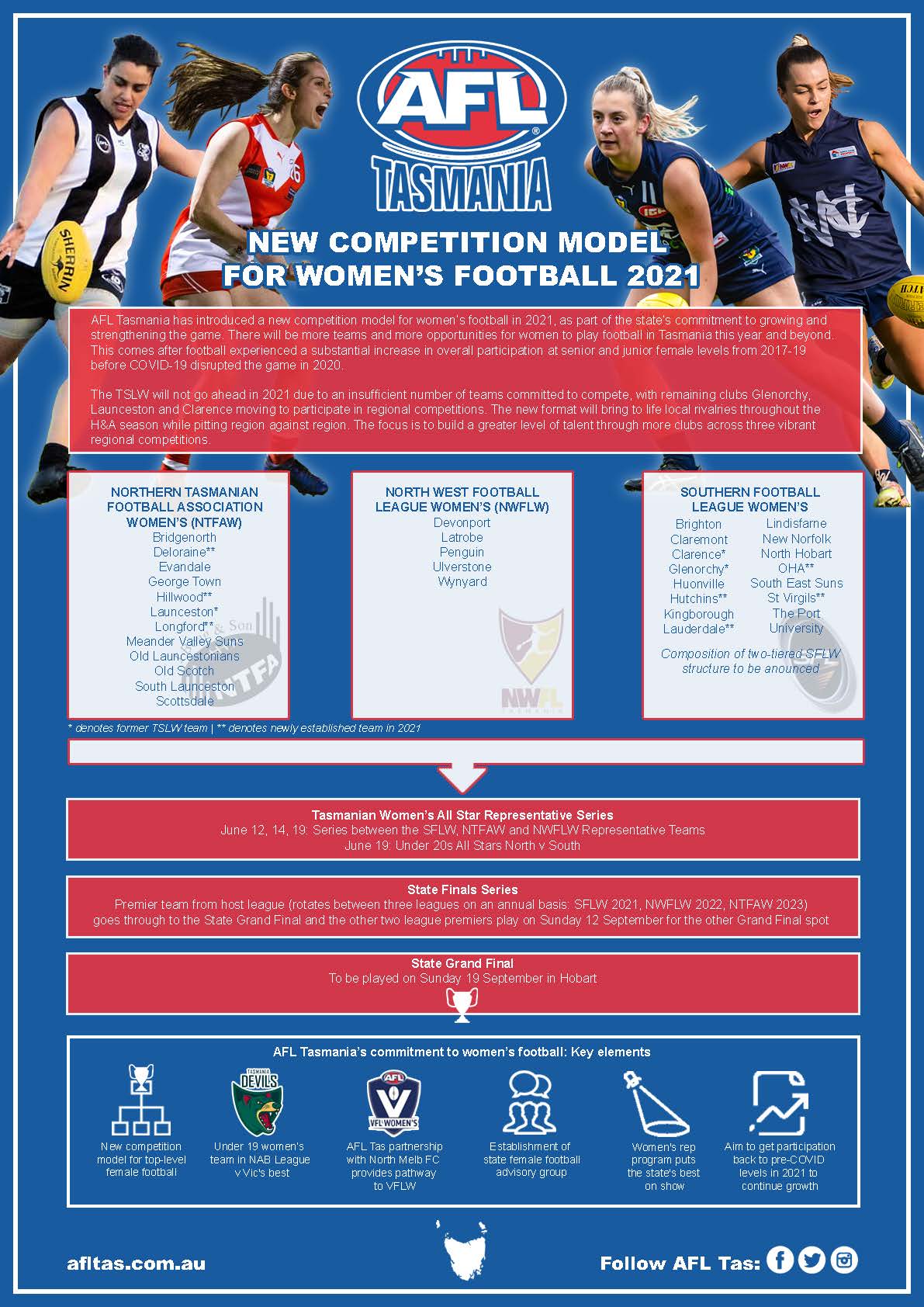