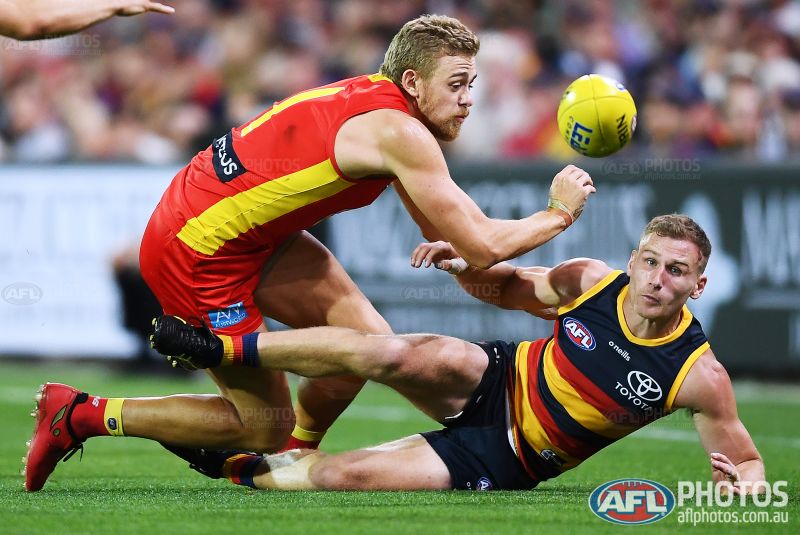 There was heartbreak for North Melbourne in their qualifying final, giving up a 14 point three-quarter time lead to end their season with a six-point loss to Collingwood. Ellie Gavalas (Western Bulldogs VFLW) was busy as usual, even though her 11 disposals tied her season-low tally. She still made her presence felt around the contests with three tackles, and she finished the season ranked fourth in tackles and fifth in disposals for the Kangaroos. Defender Nicole Bresnehan (Clarence) played her role in the backline and finished with nine disposals and three tackles, while forward Daria Bannister (Launceston) had just one disposal but made it count with a goal late in the third quarter to stretch her side’s lead.

Round three opened with a Thursday night thriller as the Lions kicked a goal after the siren to steal a win from the Magpies. For the victors, Mitch Robinson (Lauderdale) was named in the best players after a strong outing, racking up 23 disposals and setting up his teammates with eight score involvements. Grant Birchall (Devonport) was similarly impactful playing across half-back, with his 22 disposals used well at 86% efficiency and a team-high 12 marks. For the Magpies, Jeremy Howe (Dodges Ferry/Hobart) put in an excellent all-around performance with 22 disposals, eight marks, seven tackles and nine intercept possessions as he marshalled their backline. At the other end of the ground, Brody Mihocek (Burnie) worked hard throughout for his 13 disposals, but he was well held inside 50 and failed to hit the scoreboard. Still, he had five inside 50s and pushed the ball forward even as his side fell just short.

The Bulldogs were far too strong for North Melbourne in a 128-point thumping, but it was a short day for their lone Tasmanian Ryan Gardner (Burnie). The key defender went down in the opening minutes with a shoulder injury and was promptly subbed out of the game, with the Bulldogs confirming that he will undergo surgery this week and miss up to two months of football. North Melbourne’s Tasmanians made it through with nothing more than bruised egos from the heavy loss, but Aaron Hall (Hobart) was one player that could hold his head high, amassing 23 disposals and nine marks and even hitting the scoreboard for one of his side’s five goals. Young gun Tarryn Thomas (North Launceston) had a tough day and struggled to make an impact, but still managed 12 disposals with five marks and five intercept possessions. If he had converted his two behinds, his game would have suddenly looked much better on paper.

His side may have lost on the day, but Gold Coast midfielder Hugh Greenwood (Lauderdale) did a mountain of work and was among the best players on the ground. His 23 disposals included ten clearances and a whopping 18 contested possessions, and he showed off his defensive work rate with a game-high 13 tackles. All of this earned him four votes from the coaches in the AFLCA Champion Player, and he was the only Sun to poll in the game. Teammate Lachie Weller (Burnie) won less of the ball than has come to be expected with 12 disposals, but he was still able to have a big impact across the ground with six marks, nine tackles and a goal.

Warm up goals with Lachie… pic.twitter.com/1CEgHQpCTm

It was a tough day for the Tigers as they suffered their first loss of the season, but Toby Nankervis (North Launceston) did his job and probably played out a draw in the ruck battle against Tom Hickey. He led the game in hitouts with 17, while his 15 disposals included five intercepts. It was a quieter day for Jack Riewoldt (Clarence) as his side struggled at times to move the ball forward. He had ten disposals and took five marks but just two came inside 50, while his one-goal haul was a season low to date.

The Cats just barely held off a furious late comeback on Easter Monday, and defender Jake Kolodjashnij (Launceston) found himself in the thick of the action as the Hawks pushed for late goals. He played his role well in a solid performance, helping to hold the opposition to nine goals as none of their forwards kicked more than two. As a cog in Geelong’s high-possession gameplan, he took eight marks and had 13 disposals at 85% efficiency to keep the chains moving.