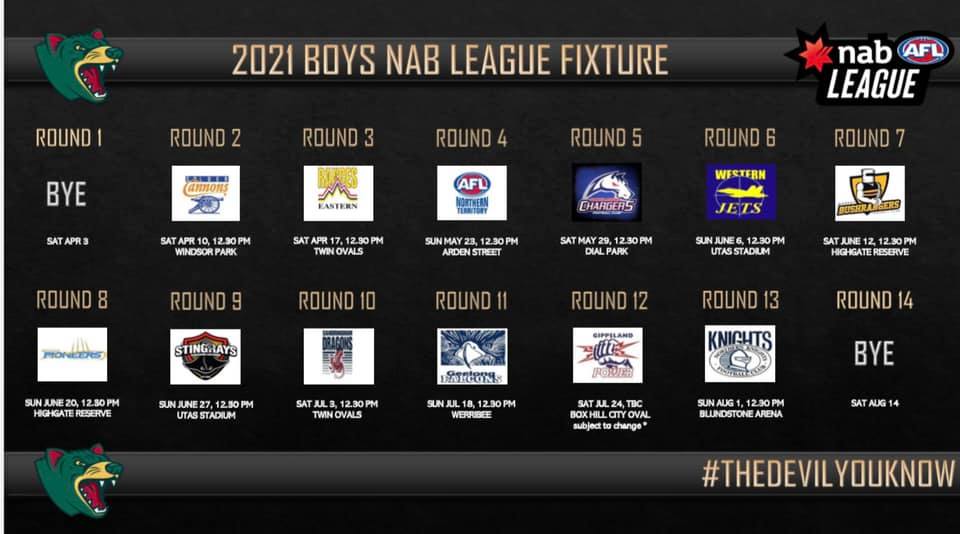 Hear from Tasmania Devils Head Coach and Talent Manager, Cameron Joyce, ahead of the boys side’s season opener against the Calder Cannons on Saturday.

It’s awesome, the boys have been waiting 18 months now to play a game of footy. The excitement of being able to run out there on Saturday against a really quality outfit in the Cannons, the boys are certainly looking forward to it.

On the pre-season focus…

We’ve probably gone hard on the fundamentals, just our skill work and some technique work both with the ball and without the ball. We’ve certainly focused on the basics, and then put a game plan together that hopefully is not too complicated, reasonably simple, and we can go and execute that.

On the style of play this season…

We’re certainly a team that wants to be good around the contest and be able to send it forward and score, and then try to back that up with our pressure as well. They’ll be the elements that we’ll be focusing on throughout the year.

On goals and expectations for the season…

We’re sort of focused on certainly getting going and then we’ll build upon that as we go. Our goal every time we train and every time we play is to improve, that’s the main focus for us.

We’ve got a really strong leadership group of seven players.

Sam Banks is our captain, he’ll play across half-back and uses the football well. He’s part of the AFL Academy.

We’ve got Ollie Sanders and Baynen Lowe as both vice-captains, both boys are good users of the ball, both play as inside midfielders and win a lot of the ball.

Ollie Davis is coming back as a 19-year-old, super professional, looking to elevate his game to another level this year. Again an inside midfielder that’s super tough inside, tackles well and wins a lot of the contested ball.

We’ve got a couple of defenders in Zach Morris and Sam Foley that are both good in the contest, good one-on-one players that we’re looking to develop in the back six.

Jonty McIvor is the other one who’s just been out with a broken foot but he’s not far away, starting to do a little bit more training now. He can play both ends, but we’re probably looking to start him as a forward. He’s a left footer, takes a good mark at his size, and he played well in the All-Stars game at the back end of last year.

You can watch the boys battle it out this season through the NAB League app.