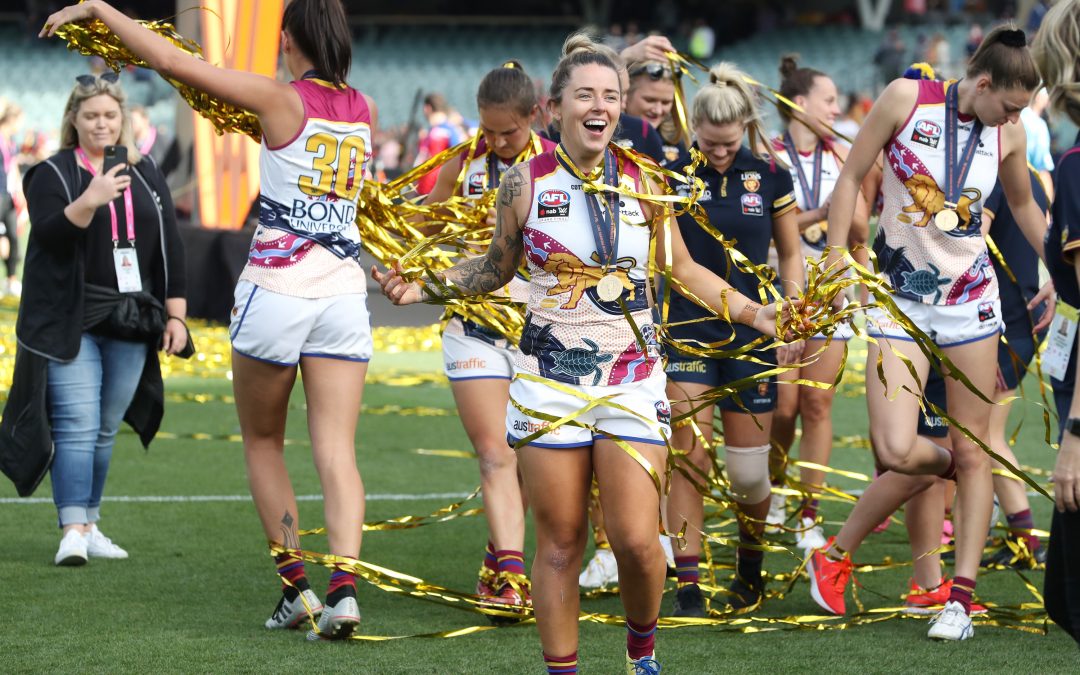 After playing in losing grand finals in both of the competition’s first two season, Brisbane finally broke through for their first AFLW premiership with an 18-point win over Adelaide. It was a deserved reward for Tasmanian Jess Wuetschner, one of the premier forwards in the competition since its inception, and she played a huge role in her side’s victory. She had the biggest scoreboard impact of any player on the ground, and her two back-to-back goals on either side of half time came when the contest was in the balance. The first came in the final minute of the first half and gave the Lions the lead at the break, with a tidy snap through traffic breaking open what had been a hard slog so far.

With the Crows pushing hard after the break but failing to convert, Wuetschner’s second extended the lead to two scores and kick-started a Lions surge that would bury the game. After collecting a bouncing ball on the edge of the arc, she unleashed a long bomb that bounced, rolled, and finally tumbled over the line to give her side all the momentum.

Even Wuetschner’s behind was impressive– a banana from an impossible angle that worked back nicely, but thumped into the post. Her goal sense was on full display, and her four tackles showed her relentless effort throughout. With a long journey to the AFLW and the 2021 season, a premiership medal was a well-deserved reward for one of Tasmania’s finest.

The Tigers proved far too strong for St Kilda in an 86-point drubbing, and Toby Nankervis (North Launceston) feasted on an undermanned Saints lineup. Up against third game ruckman Paul Hunter and part-timer Jake Carlisle, Nankervis racked up 40 hit-outs to lead the entire league in round five. As always his work around the ground was also outstanding, as he finished with 22 disposals and six tackles in a well-rounded performance. There were plenty of fireworks from teammate Jack Riewoldt (Clarence) inside 50, with the big forward booting a season-high five goals and dominating in the air with eight marks. He now sits second in the Coleman Medal race and is on pace for his highest goal tally since 2010, albeit with plenty of season still to come.

"It really meant a lot to me."

After a promising debut in round four, Rhyan Mansell (North Launceston) impressed once again with a composed display. His 13 disposals featured ten kicks, and he used the ball well from the backline with a 77% disposal efficiency rate. On what was already a dark day for the Saints, Jimmy Webster (Glenorchy) was subbed out in the second quarter with a groin injury. The defender was among his side’s best last week and had started brightly again, amassing eight disposals early before being removed from the game.

As if Collingwood’s third loss in a row wasn’t bad enough, they also lost Jeremy Howe (Dodges Ferry/Hobart) to injury in the 27-point loss to the Eagles. The star defender came off worse for wear after a marking contest in the second quarter, with the Magpies awaiting scans on his hamstring this week. The news was slightly better for Brody Mihocek (Burnie), who ended the game with ice on his shoulder from what coach Nathan Buckley described as “a bit of a stinger”. He was lively before that but wasteful in front of goal, finishing with two goals and five behinds from his ten disposals.

The Suns also suffered their third consecutive loss, going down to the Bulldogs by 62 points in Melbourne. One guarantee for the Suns every weeks is plenty of pressure from Hugh Greenwood (Lauderdale), as he laid eight tackles to extend his lead atop the league standings. With ten contested possessions from his 13 disposals, he did a mountain of work around the stoppages. His teammate Lachie Weller (Burnie) was less prolific than in recent weeks, but he still put together a solid performance with 18 disposals and seven marks coming all across the ground. His six inside 50s were the most of any Suns player, as were his 494 metres gained.

After a near-best afield performance last week, it was a tougher day at the office for Liam Jones (North Hobart) as his Blues went down to Port Adelaide by 28 points. Matched up on Mitch Georgiades for much of the day, the Carlton defender’s usual intercepting style was negated as he had his hands full checking the young forward. Jones finished with six disposals and just one mark, while Georgiades kicked three goals from 15 touches.

It has been an up-and-down start to the year for the Lions, but their Tasmanian contingent has been remarkably consistent and continued that trend in a 57-point win over the Bombers. Veteran defender Grant Birchall (Devonport) was steady as always, marshalling Brisbane’s defence and finishing with 18 disposals and seven marks in another solid display. Further up the ground, Mitch Robinson (Lauderdale) found the ball consistently to finish with 20 disposals and four marks. There weren’t many empty touches among them either, with his five clearances and five inside 50s ranking among the game’s leaders.

It wasn’t always pretty, but the Cats walked away with a 30-point win over North Melbourne on Sunday. Much like his side as a whole, Jake Kolodjashnij (Launceston) was a solid if unspectacular performer, finishing with 15 disposals and five marks. His ball use from defence was exceptional, going at 80% efficiency, and it’s always a good day when your defence holds the opposition to just seven goals. For North Melbourne, Tarryn Thomas (North Launceston) continued to show flashes of his potential with 11 disposals and a goal. Playing largely forward of the ball, he did his best to keep the scoreboard moving with three score involvements. After starting the season in excellent form it was a disappointing day for Aaron Hall (Hobart), with the midfielder subbed out of the game after copping a heavy knock to the head in the second quarter. He had started brightly with eight disposals and a goal, but with the league’s concussion protocols in place he may not be available to play in round six.

.@NMFCOfficial's Aaron Hall has been subbed out of the game and replaced by Curtis Taylor after this incident.