Tasmanians in the (Inter)State Leagues: April 17-18 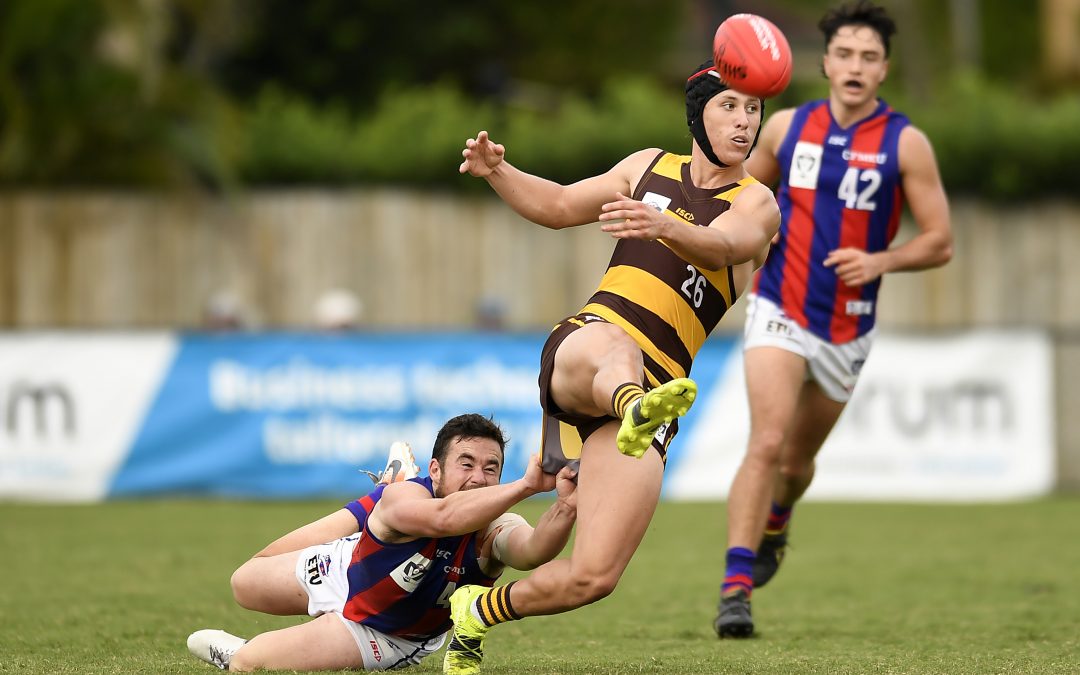 After the entire 2020 season was cancelled, the VFL has undergone a major change in 2021, with a number of former NEAFL clubs from NSW and QLD – including the four AFL reserves teams – joining the league, increasing the competition size to 22 clubs. The non-AFL listed Tasmanians officially tied to VFL sides this year are:

*Collins is listed as a development player and will likely play primarily in the NAB League.

Ben Brown’s first outing after a lengthy knee lay-off was as successful as could have been hoped for, with the key forward booting three goals in Casey’s 51-point VFL win over Box Hill. Teammate Jay Lockhart was also prolific for the Dees with 23 disposals and 9 marks. Andrew Phillips was one of Essendon’s best in their heavy defeat to Brisbane, finishing with 14 disposals, 9 marks, 22 hit-outs and two goals. Collingwood’s Isaac Chugg (12 touches) and North Melbourne’s Matt McGuinness (17 touches) were reasonable. Of the non-AFL listed players, Mitch Hibberd marked his return to Williamstown with 27 disposals and a goal, Matt Hanson gathered 28 touches for Werribee, Callum Mitchell was good for Geelong with two goals from his 14 touches while reigning Port Melbourne Best & Fairest Eli Templeton finished with 18 disposals and a goal.

It was an unspectacular week for most of the SANFL Tasmanians. Adelaide’s Chayce Jones had a day to forget, finishing with just five touches in the Crows’ 83-point loss to reigning premiers Woodville-West Torrens. Forward Jackson Callow had 13 disposals and took five marks, however finished goalless on a day when Norwood as a team only managed two majors. Fellow spearhead Aiden Grace also had an off day, booting 0.3 to be the major culprit in Central District’s wayward total of 5.12. Hamish Allan made his first senior appearance for Sturt, gathering only five touches but winning 26 hit-outs in a 50-point win, while Mitch O’Neill gathered 22 disposals for South Adelaide in their nine-point win over Port Adelaide. In the Reserves, Fraser Turner continued to press his claims for a senior debut for South Adelaide, gathering a team-high 24 disposals, while Sturt’s Jared Dakin was again solid with 17 touches and a goal. Meanwhile Kieran Lovell and Jesse Lonergan were both late withdrawals for their respective sides.

Both WAFL Tasmanians enjoyed solid outings in Round 3: Brady Grey was huge in the midfield for Perth, gathering 30 disposals, taking 6 marks and laying 7 tackles, however the Demons suffered their second big defeat in as many weeks, this time a 32-point loss to flag fancies Claremont. Hugh Dixon meanwhile was a more than useful contributor as East Fremantle overcame East Perth at home by 25 points. The tall forward had 15 touches, clunked an impressive 10 marks and booted two goals.