Tasmanians in the AFL: Round 6 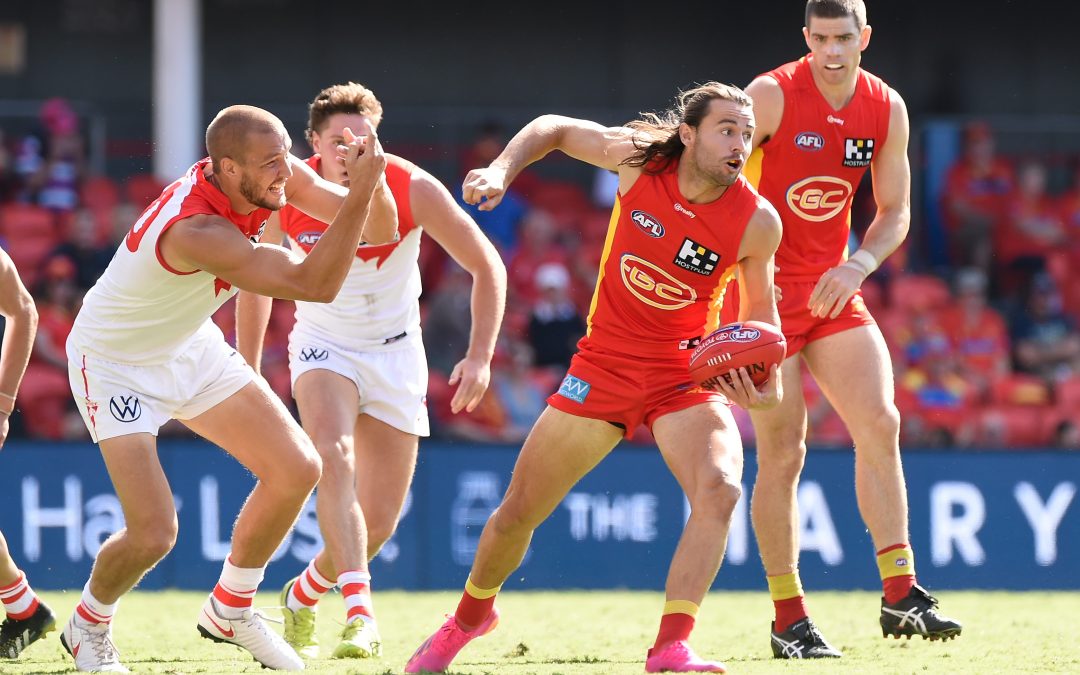 The Cats were unstoppable in a 87-point drubbing of West Coast, but a late injury to Jake Kolodjashnij (Launceston) put a dampener on the celebrations. The defender had a quiet game by the numbers, finishing with nine disposals and just one mark, but he played his role in keeping the Eagles to just two goals after quarter time. A knee injury saw him subbed out of the game in the fourth quarter, with some doubt as to whether he will be fit to play against Sydney in round seven.

A week after being belted by the Western Bulldogs, Gold Coast bounced back with an emphatic 40-point win over Sydney at Metricon Stadium. As always, Hugh Greenwood (Lauderdale) was in the thick of the action at the stoppages, with his 19 disposals highlighted by 16 contested possessions, seven clearances and a third quarter goal that pushed the Suns to their highest lead of the day. His seven tackles were slightly down on his season average, but he still comfortably leads the league in that category while also sitting in the top ten for contested possessions. Fellow Sun Lachie Weller (Burnie) put the icing on the cake with his side’s final goal, and that capped off a typically classy performance from the versatile midfielder. His 17 disposals and seven marks came from all areas of the ground and he used the ball well with 76% disposal efficiency.

Carlton fought hard before eventually going down to the Lions by 18 points, and Liam Jones (North Hobart) was again among their best players on the day. A game-high 14 intercept possessions moved him to second in the league for the season, and his aerial prowess was on display with six of his eight marks contested. For the victorious Lions, Mitch Robinson (Lauderdale) was typically industrious on the ball, finishing with 18 disposals and 11 contested possessions. He too was productive in winning the ball and reversing the momentum with seven intercepts and six inside 50s. If you were asked to describe a typical Grant Birchall (Devonport) performance, it would probably look a lot like his round six effort; 16 disposals used at 81% efficiency, seven rebound 50s and, most importantly, a win for his team.

The Tigers were emphatically beaten by the high-flying Demons, with Richmond’s trio of Tasmanians unable to stem the tide. Up against the formidable Max Gawn, ruckman Toby Nankervis (North Launceston) made his opposite number work around the ground as he racked up 22 disposals and a game-high 19 contested possessions. He was soundly beaten in the ruck, though, finishing with just 15 hit-outs and the Tigers lost the overall count 42-20.

Jack Riewoldt (Clarence) continued to hit the scoreboard, kicking two of his sides six goals in a tough day up forward. That saw him drop in the Coleman Medal standings, but he still sits tied for third with 19 majors for the year. At the other end of the ground, Rhyan Mansell (North Launceston) continues to find his feet at AFL level, finishing with 10 disposals and three tackles in another solid display.

North Melbourne remains winless in 2021 after a comprehensive 51-point loss to Fremantle, but Tarryn Thomas (North Launceston) continues to develop in a variety of roles. Playing higher up the ground than in recent weeks, he racked up 19 disposals with ten contested possessions, four marks and five tackles in another all-around display. The only blemish was his kicking for goal, with his two behinds coming at a time when the game was still potentially up for grabs.

DN: Tarryn Thomas did some good things in the midfield today. Tom Powell showed some real class around stoppages.

The Bombers overcame a sluggish start to win by 24 points on ANZAC Day, and Andrew Phillips (Lauderdale) played his role beautifully in his first game of the season. While Collingwood’s Brody Grundy dominated the hit-outs, Phillips worked hard around the ground and made an impact with a number of timely spoils in defence. His goal in the first quarter helped the Bombers to wrest back some momentum, and he finished with 12 disposals used at 91% efficiency in an impressive outing. For the Magpies, it was another mixed day for Brody Mihocek (Burnie) who showed some good signs but struggled to have a consistent impact. He finished with just six disposals and four marks, and on a day where his side struggled at times to generate scoring chances he would have been disappointed to convert just once from three scoring shots.