Tasmanians in the AFL: Round 10 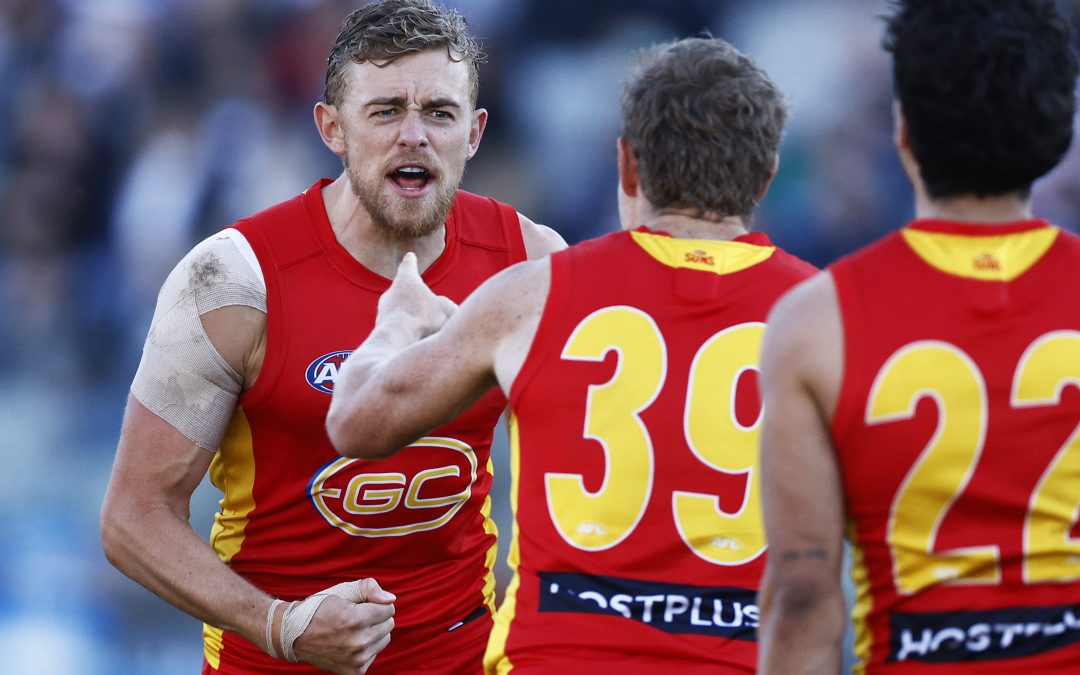 Brisbane claimed their sixth straight win in round ten, beating the reigning premiers by 28 points in a Friday night blockbuster. Midfielder Mitch Robinson (Lauderdale) continued his strong start to the season and was again named in Brisbane’s best players. He worked hard across the ground to collect 22 disposals and six marks, and he brought his trademark hard edge to a game that featured plenty of physical play. His tackle of Dustin Martin in the second quarter was a highlight, as he dodged the Tigers superstar’s trademark fend-off to drag him down and set up an important Lions goal.

Mitch Robinson takes down Dusty with a huge tackle and the Lions go bang!#MonsterMoments | #AFLLionsTigers pic.twitter.com/oRtapfav4s

It was a quieter day for Grant Birchall (Devonport) as the rebounding defender finished with 15 disposals and five marks. Still, he worked hard throughout and collected plenty of those possessions in the middle third of the ground, providing support as the Lions looked to spread from the contest. For the Tigers, Toby Nankervis (North Launceston) was outdueled by Oscar McInerney in the ruck, with the big Lion winning the hit-out count 35-21 and helping his side to dominate the clearances. Nankervis often does his best work around the ground, though, and he ran his opponent hard as he collected 18 disposals and a team-high 15 contested possessions. Jack Riewoldt (Clarence) kicked multiple goals for the first time since round six, booting three majors from his seven disposals. He grabbed three marks inside 50 and looked dangerous throughout, and he remains inside the top ten in the Coleman Medal race with 25 goals this season.

A 23-point win over the Hawks saw Carlton stop their slide after back-to-back losses, and Liam Jones (North Hobart) played his role in the victory. Opposing sides have learned not to allow him to roam free for defensive marks, but he still had seven intercept possessions in his 12 disposals on the day. Most importantly, he was part of a defensive unit that conceded just three goals after half-time, allowing the Blues to run away with the win.

It wasn’t always as comfortable as the margin might suggest, but Geelong claimed a 34-point win over the Suns as Jake Kolodjashnij (Launceston) returned from injury. After missing the last three games with a knee complaint, Kolodjashnij was solid as always against the Suns and collected ten disposals and seven marks.

Hugh Greenwood snaps a beauty to open the second half in Geelong 🔥#AFLCatsSuns pic.twitter.com/ayWqFF1Uh8

He may have been in the losing side, but Hugh Greenwood (Lauderdale) was again one of Gold Coast’s best players and fought hard from start to finish. 18 disposals was slightly below his season average but he claimed a game-high 16 tackles, six more than the next player on the ground, as well as 12 contested possessions. He now leads the competition in tackles by a huge margin and sits fourth for contested possessions. Suns teammate Lachie Weller (Burnie) was another solid contributor, as he finished with 16 disposals and six tackles across all areas of the ground.

It was a demoralising night for the Saints as they went down to the Bulldogs by 111 points, but defender Jimmy Webster (Glenorchy) was far from disgraced. Under immense pressure in the Saints backline, he finished with 17 disposals used at 88% efficiency and six intercept possessions. On a day where his team struggled mightily, Webster could hold his head high.

As if a two-point loss to Fremantle wasn’t disappointing enough, luckless Swan Robbie Fox (Burnie) was subbed out of the game in the third quarter. Playing just his third game after returning from a pre-season finger injury, Fox left the field after being scratched in the eye and didn’t return as he was replaced by the medical substitute. It had been a very quiet day for the small defender prior to that incident, with just two disposals to his name.

The struggling Magpies fought bravely against a top four fancy in Port Adelaide, but they ultimately fell short by just one point at the MCG. The result would have been a bitter pill to swallow, and it would be even tougher for Brody Mihocek (Burnie) as he was held goalless for the second consecutive game. He worked hard and collected 11 disposals, but with just one mark inside 50 he was well smothered in front of goal.

Playing in his 50th AFL game after a long and winding career, Essendon’s Andrew Phillips (Lauderdale) would have enjoyed his side’s 72-point win in his milestone game. The ruckman put forward a typically robust performance to celebrate the occasion, leading the game in hit-outs with 23 and crashing packs across the ground. His mark and goal to open the third quarter was a fantastic moment for a player whose career has had plenty of ups and downs.

On an otherwise grim afternoon, there was plenty to like about Tarryn Thomas' performance ⭐ pic.twitter.com/6X2bcr5XnT

Despite his team suffering a heavy loss, Tarryn Thomas (North Launceston) was again impressive and was named in North’s best players. The young gun continues to grow into his new midfield role every week, and against the Bombers he finished with 21 disposals, five marks and five clearances. Perhaps most impressive given the pressure applied by the Bombers was the impact he had with those possessions– he booted two goals, used the ball at a 90% efficiency rate and had nine inside 50s in a strong all-around performance. Teammate Aaron Hall (Hobart) was prolific once again, racking up 29 disposals (24 kicks) and seven marks and driving the ball out of the backline on countless occasions. In full games this year he is now averaging 30.5 disposals and eight marks per game, and he is building a very impressive season in his new role.