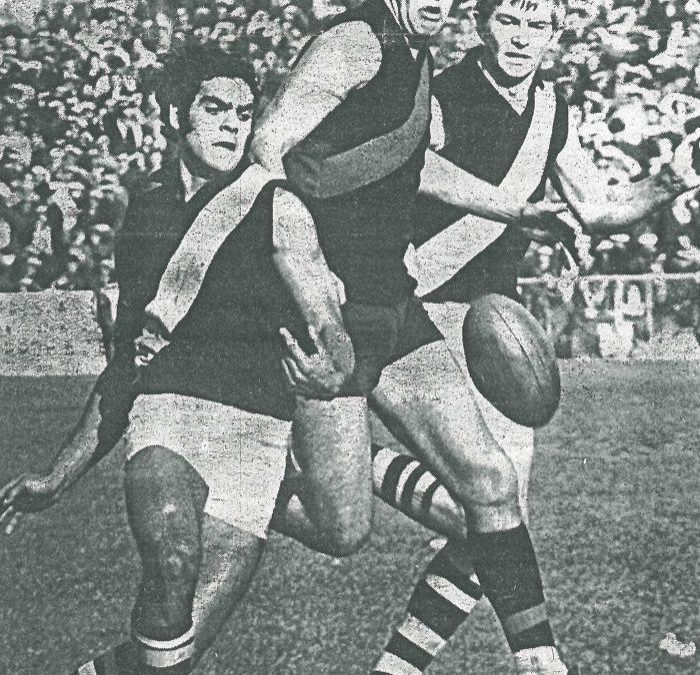 As the AFL celebrates Sir Doug Nicholls Indigenous Round, AFL Tasmania would like to recognise the Indigenous Tasmanians that have contributed so much to the game over the years.

It’s impossible to deny that Derek Peardon was a football trailblazer. He was the first Indigenous player to line up for Richmond in the VFL and one of the first Indigenous Tasmanians to play in the league. He was also an early catalyst for the AFL’s ‘Dreamtime at the G’ game, now a mainstay on the football calendar. With so many Indigenous players and Indigenous Tasmanians now lighting up the AFL, the path that Peardon first walked has been cleared considerably over the years as more have followed.

For years Peardon thought he was born on Cape Barren Island, until some government paperwork revealed that he was actually born at Whitemark on Flinders Island. Regardless, Cape Barren is where he first connected with football, as he told Richmond FC historian Rhett Bartlett in a 2017 interview. “I had this little rubber football, day in and day out I used to kick this little football into this pine tree,” Peardon said. When he visited the island in 2012, he found the tree still standing tall and strong.

Peardon was forced to overcome plenty of hardship in his younger years, as he was a part of what is now known as the Stolen Generation. Taken from his mother on Flinders Island and separated from his sister Annette at the age of seven, he lived in a boys home in Launceston right up until he was 15. “The matron or the superintendent came and got me out of the car to start my eight years at the home and I was yelling out to Annette and I was calling her Mum; ‘Mum, Mum’,” he told the ABC in 2015. 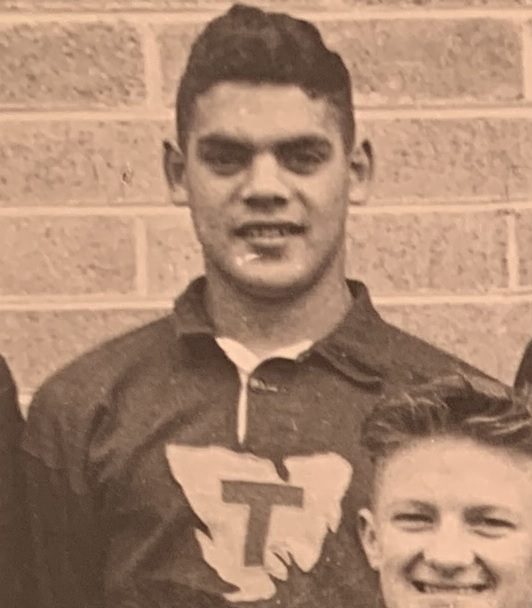 Monthly visits from his sister were something to look forward to, as were his early games of football. Peardon started playing competitively as he attended school, first at Young Town Primary and then at Kings Meadows. “I never played every week— if you misbehaved or things like that, well, you weren’t allowed to play,” he told Bartlett. After excelling in school football he was picked to represent Tasmania at the 1964 under-15 national carnival. The team travelled to Western Australia and Peardon was the joint best and fairest of the tournament, with his performances putting him on the national radar.

Clubs in Melbourne began to contact the boys home to enquire about his footballing future, and in 1965 he was invited to Melbourne as a guest of the St Kilda Football Club. He and the superintendent of the home visited Moorabin oval, meeting Saints legend and Tasmanian football icon Darrel Baldock. It was back in their motel room that the phone rang, though, with an interesting proposition put to the superintendent. “It was the Richmond Football Club asking if they’d bring the boy down for a training run,” Peardon told Bartlett. “I was only 14 and a half, I wasn’t even 15 yet I don’t think, and I had to do a run with the seniors on a Sunday morning.”

He clearly impressed the right people, as he joined the Tigers and moved to Melbourne at just 15 years of age. A skilled player and a lightning-quick athlete, he quickly moved through the ranks at the Tigers and made his VFL debut late in the 1968 season—a year in which he also played under-19s and reserves. “I don’t think many players have done that,” he said. He was a contender for both the Morrish Medal in the under-19s and the Gardiner Medal in the reserves that year, finishing third in one and fourth in the other. All of this was at a time when Aboriginal players were scarce at the top level. “I can’t really place any Aboriginal players, it wasn’t what it is today where they’re everywhere,” he told Bartlett.

Also a talented sprinter, Peardon travelled to several athletic carnivals in preparation for the 1969 season, winning both the Maryborough Gift and the Leongatha Gift that year. In fact, he was all set to run at the famed Stawell Gift until the Tigers intervened. “The club wouldn’t let me run at Stawell because the football started at Easter time back then,” he told Bartlett. He had 21 disposals against South Melbourne in that 1969 season, before enjoying his best season the following year; four games with more than 20 disposals, and a career-high 26 touches in a win over Geelong. 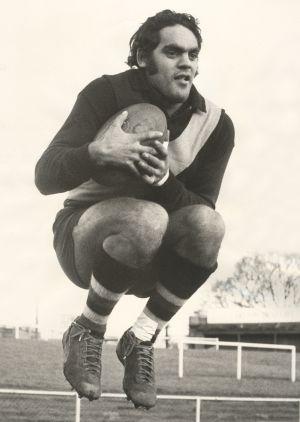 Just as he was becoming a regular in the VFL side, a back injury cut his season short and set him back. He returned to play three more games in 1971, but a knee injury hampered what would be his final season in Victoria. He would depart at the end of the year, but not before playing a key role in Richmond’s reserves premiership in his final game for the club. “I just hopped on a plane and came back home, I was just sick of Melbourne to be honest,” he told Bartlett. “I didn’t like it at all.”

That may have been the end of Peardon’s VFL career, but his impact at the top level was lasting. Richmond teammate Kevin Sheedy says Peardon was the first Indigenous man he had ever met. “I grew up in South Yarra where you wouldn’t see an Aborigine,” Sheedy told The Mercury in 2014. “[Meeting him] was no different to anybody coming from overseas. You just started to pick up information.” Sheedy would go on to become a vocal supporter of Indigenous footballers, and he was the creator of the AFL’s ‘Dreamtime at the G’ fixture that is played annually during Sir Doug Nicholls Round. Peardon told The Examiner in 2019 that Sheedy had told him that he was the inspiration for his work and the marquee fixture. “He went from meeting me, to get and meet other [indigenous] players and travel around the Top End to those little towns, to Dreamtime at the G,” Peardon said. “So I am very proud of my part.”

Peardon continued his football career in Tasmania with great success. He returned to Launceston and lined up for NTFA side City-South, playing almost 100 games in six seasons. That included NTFA premierships in 1972 and 1974, as well as a state premiership in ’72. Individually, he won a pair of club best and fairest awards, and in 1973 he won the Hec Smith Medal as the best player in the NTFA. He represented the NTFA on nine occasions, played for Tasmania twice, and some years later was named as ruck-rover in the City South Team of the Century. Peardon played one final season in the Tasmanian Football League with North Hobart before drawing the curtain on a brilliant career.

Peardon has largely remained out of the spotlight since retiring from playing. He didn’t return to Richmond until 2015, when he was invited to be Richmond’s ‘Homecoming Hero’ at the Dreamtime at the G game against Essendon. His sister Annette has worked tirelessly to gain reconciliation for the Tasmanian Stolen Generations, and Derek stood with her as she gave a powerful speech to Tasmanian parliament in 1997 on the day that Premier John Lennon acknowledged and apologised for the Stolen Generations. 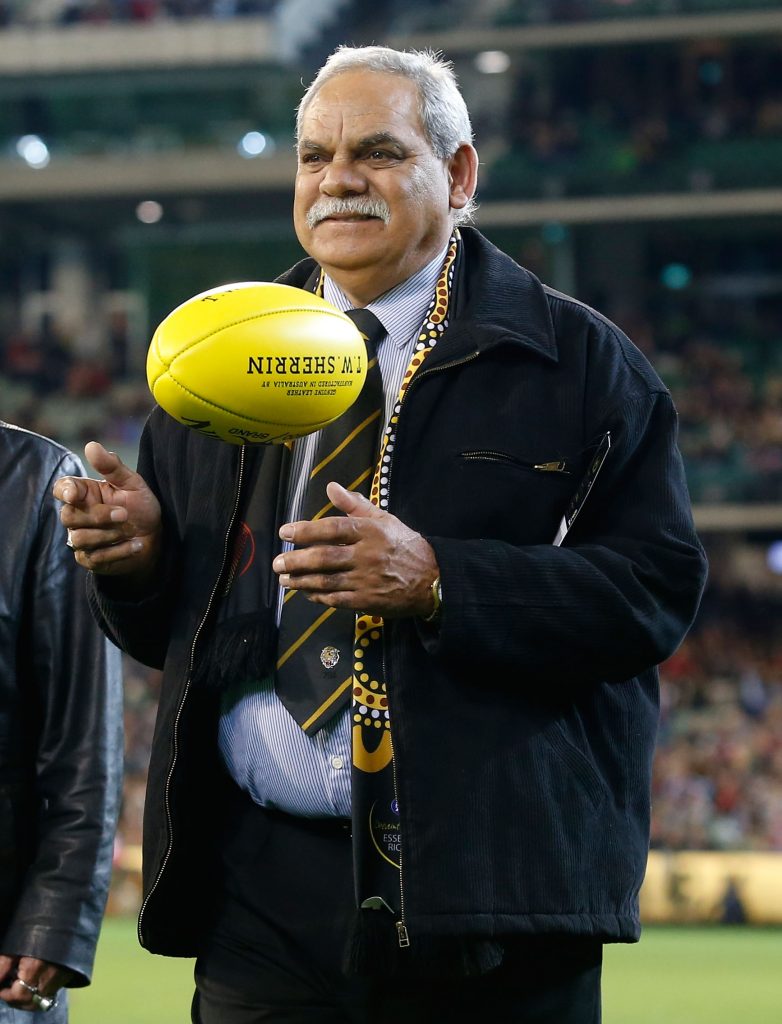 Richmond Homecoming Hero Derek Peardon is seen before the 2015 AFL Round 09 Dreamtime at the G match between Richmond Tigers and the Essendon Bombers at the MCG, Melbourne on May 30, 2015. (Photo: Adam Trafford/AFL Media)

One of Peardon’s most lasting impacts on football is evident in every AFL game. He was one of the early Indigenous footballers at the top level, and he cleared a path for the numerous Indigenous players lighting up the league on a weekly basis. One such player is Launceston local Tarryn Thomas, who drew Peardon back to watching the modern game in his first season. “He’s such a good footballer—he’s quick, he’s agile, he gets around and gets a goal or two,” Peardon told The Mercury in 2019. “I think he has a pretty good future.” Thomas, and the rest of the league’s Indigenous superstars, certainly have the likes of Peardon to thank for initiating change in football.