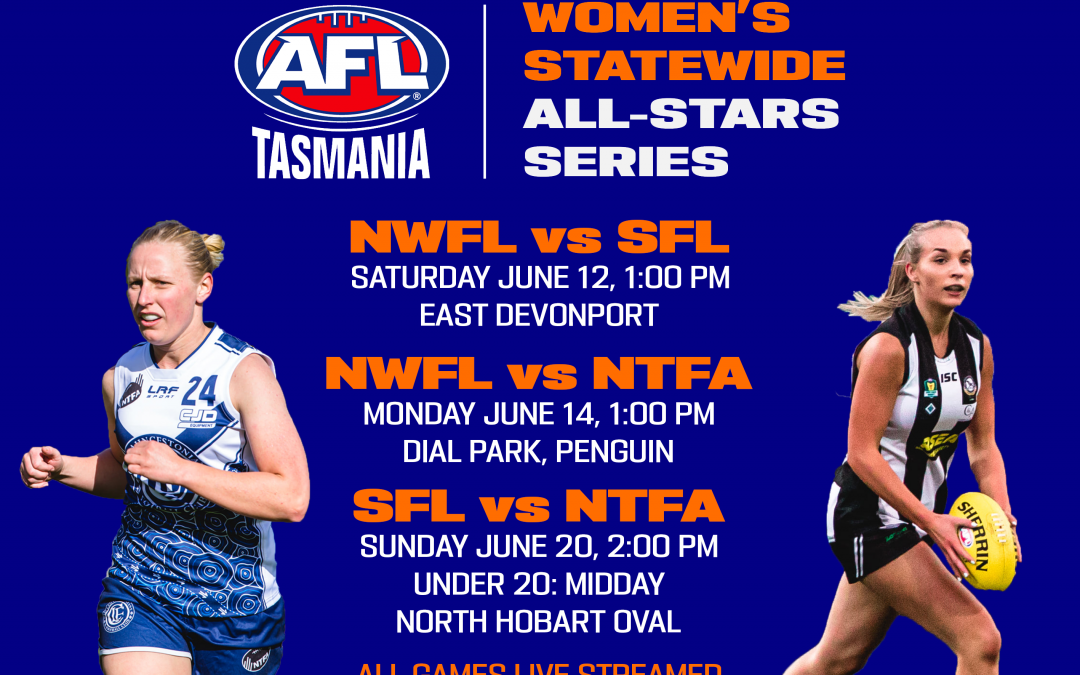 The first annual Tasmanian Women’s Statewide All-Stars Series will kick off over the coming Queen’s Birthday long weekend, with representative sides from the south, north and north-west of the state facing off in a three-game series.

The series is part of the new competition model for women’s football in Tasmania, introduced at the start of 2021 and designed to grow and strengthen participation and pathways for females in the sport.

The full schedule for the series is as below:

Entry to games is available for just a gold coin donation, and every match will be streamed live and free to watch via AFL Tasmania’s Facebook page (https://www.facebook.com/AFLTAS/) and YouTube channel (https://www.youtube.com/user/AFLTAS).

Speaking ahead of the series, SFLW coach Brad Willis said: “It’s being promoted as an All-Star series, and it is exactly that— you get the best players from across the state pitted against one another.

“The best females in the state have not had this opportunity, so I think they see it as being pretty important in terms of showcasing women’s footy.”

“To be able to test themselves as a group and as individuals against the best in the north-west and the south, it’s an exciting opportunity for them and I know they’re all really looking forward to the challenge.”

NWFLW coach Richard Douglas said: “It’s ground-breaking to have a series like this, and I think women’s footy is leading the way to how other competitions could look at playing that high level of football.

“It’s going to make women’s football around the state better, the opportunity to play the best against the best.”

Chair of the AFL Tasmania Female Football Advisory Group, Julia Price, said: “This is a great initiative to embrace football in the players’ local regions and create a competitive and engaging rivalry for years to come.

“This will inspire players, coaches and administrators of the future, along with current ilk, to seal a place in the football representative community.”

AFL Tasmania will provide coverage of the series via afltas.com.au as well as AFL Tasmania social media channels.