Tasmanians in the AFL: Round 15 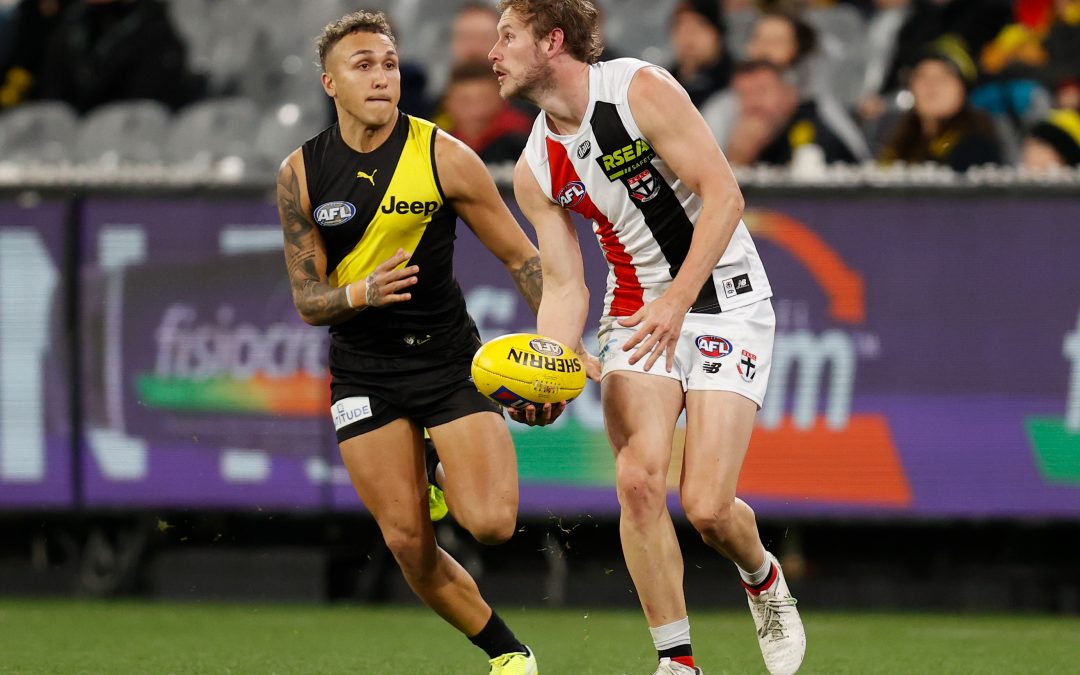 A battle of top-four contenders was set to be a Thursday night epic, but Brisbane proved to be far too strong in a 44-point win over Geelong. It was a fairly quiet night for Mitch Robinson (Lauderdale) in the win, as he finished with 14 disposals and six marks. He is still enjoying a strong season, ranking above average in the league for kicks and metres gained per game, but he was able to take a back seat in a comfortable victory. For the Cats, Jake Kolodjashnij (Launceston) had his hands full in defence as the Lions produced 29 scoring shots from 55 inside-50s. He had 11 disposals but just two marks as the Cats struggled to play their usual high-possession game.

The reigning premiers were stunned on Friday night, with St Kilda running away with an impressive 40-point win at the MCG.

Saints defender Jimmy Webster (Glenorchy) was a standout for the victors and was named in his side’s best players. He had 20 disposals and seven marks, and he used the ball at 80% efficiency to help the Saints keep possession and set the tempo. His courage in the contest was on full display in the second quarter when he went back with the flight of the ball and was crunched by the waiting pack. He continued to play after that big hit, and his effort personified the gritty performance of the Saints. For the Tigers, Jack Riewoldt (Clarence) struggled to make an impact on the scoreboard, finishing with just one behind. A handful of his 13 disposals came up the ground and he had four inside-50s, but on a night where his teammates also failed to hit him in dangerous areas he too used the ball at just 31% efficiency. After entering the game in the third quarter as the medical sub, Tigers youngster Rhyan Mansell (North Launceston) had very little chance to make an impact. He played just 20 minutes and had two disposals.

The Dockers claimed an important 12-point win over Collingwood on the road in round 15, drawing level with the top eight on the ladder. Key defender Alex Pearce (Devonport) was solid once again in his second game back from injury, finishing with 11 disposals and seven intercept possessions. He faced six contested defence one-on-ones, winning four, and played his role well in the win. At the same end of the ground was Pies forward Brody Mihocek (Burnie), who had another wayward afternoon in front of goal. He booted one goal and four behinds from his 13 disposals, continuing some hot and cold form this season. He is always a threat inside the forward 50, but he would be hoping to improve on his 42.3% goalkicking accuracy across the year.

The Kangaroos claimed their second win of the season, and their second win in Tasmania this year, holding off a late Gold Coast charge to win by nine points. For the second week in a row, Aaron Hall (Hobart) was stifled somewhat but still produced a solid performance. He finished with 17 disposals and nine marks from the backline, providing his usual thrust forward when he could shake his opponent. Teammate Tarryn Thomas (North Launceston) was also a little below his recent production, but he still found ways to make an impact in the win. His 16 disposals featured a game-high six inside-50s, and he finished second for the Kangaroos with 412 metres gained.

Hugh Greenwood creates something out of nothing to keep the Suns alive! 🔥

It seems safe to pencil in ten-plus tackles for Hugh Greenwood (Lauderdale) every single week as he continues to do all of the dirty work in the Suns midfield. He had a game-high 11 tackles to go with 17 disposals and seven clearances, and his fourth-quarter goal kept his side alive late in the contest.

Sydney nearly pulled off an upset on the road, falling by just ten points to Port Adelaide at the Adelaide Oval. Robbie Fox (Burnie) continues to play his role in an overachieving Swans side, and the small defender was solid once again against the Power. His 13 disposals came at 85% efficiency, and his six one-percenters ranked among the game’s leaders. It’s rarely flashy, but Fox does all of the little things that coaches and teammates would love.

Ouch: Ryan Gardner's shoulder left in serious trouble after a HUGE collision with Josh Kennedy, leading to an Eagles goal. 🤕

The Dogs continued their bright form with a thumping 55-point win over West Coast, but it was another dark day for Ryan Gardner (Burnie). The defender has grown with every game and was building an impressive season, but after missing eight games with a shoulder injury early in the year he was again left clutching his shoulder in the third term against the Eagles. He was subbed out of the game shortly after, and while an exact diagnosis isn’t yet clear the Bulldogs expect him to spend more time on the sidelines.

The Blues claimed a much-needed win on Sunday evening, sneaking home by ten points against the Crows. Defender Liam Jones (North Hobart) dominated in the air once again, finishing with eight marks and ten intercept possessions. He leads the AFL in intercept marks and sits third for intercept possessions, and he played a key role in Carlton’s fifth win of the season. Crows youngster Chayce Jones (Launceston) was solid once again in his new defensive role, collecting 15 disposals and seven marks from the backline. He provided plenty of drive to move the ball forward, finishing with four rebound-50s and four inside-50s.