Tasmanians in the AFL: Round 17 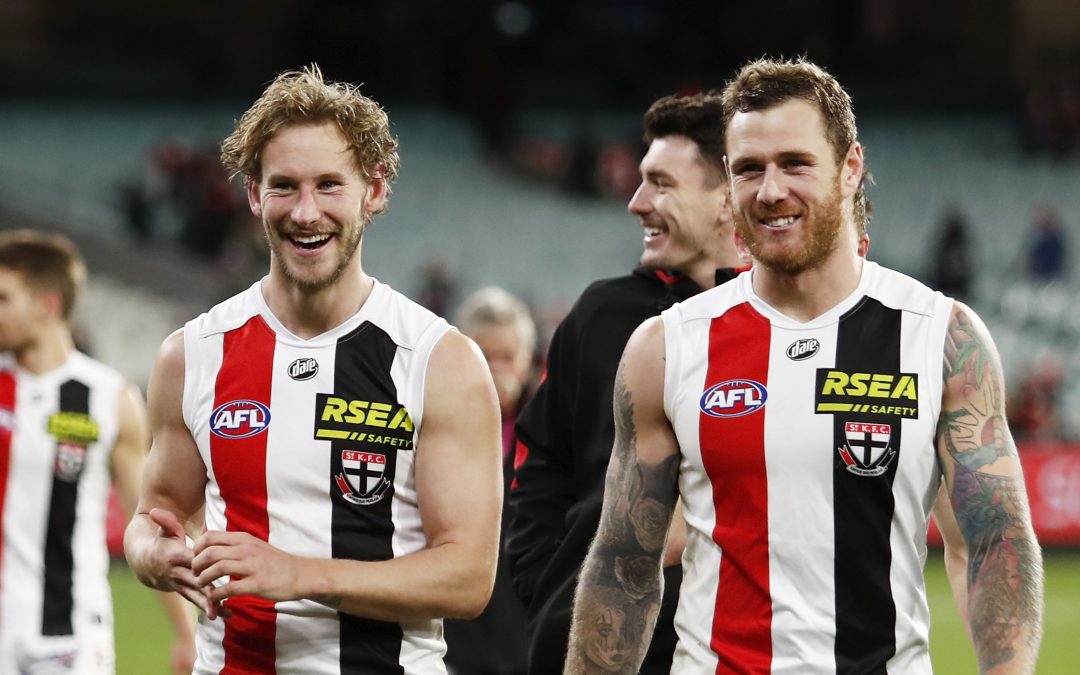 The Demons bounced back in a big way on Thursday night, comprehensively outplaying Port Adelaide and claiming a 31-point win on the road.

Our No.50 reflected on last night’s win, shortly after landing in Melbourne. 🎥👇#FiredUp pic.twitter.com/ljWEC98UB1

Playing his first senior game since round nine, Ben Brown (Glenorchy/Devonport) was used in a different role and worked hard throughout. Playing higher up the ground as a leading target, he finished with ten disposals, all kicks, and four marks. All but one of his possessions came from outside Melbourne’s forward 50, and he had five inside 50s from his own boot. It wasn’t a huge individual performance from Brown, but he played his role in an impressive performance that saw the Demons return to the top of the ladder.

The Crows struggled under the bright lights of Friday night football, kicking just two goals and suffering a 63-point loss to Essendon at Marvel Stadium. After finding his feet in the backline in recent weeks, Chayce Jones (Launceston) was solid once again despite sitting in the firing line for much of the night. He had just 11 disposals, but he used the ball well with 82% efficiency and just one turnover. The Crows struggled to shift the momentum in their favour throughout the entire game, but Jones did his part with four intercept possessions and six rebound 50s. After a tough start to his AFL career, he seems to have found his niche at the top level.

The Dockers travelled to Launceston and cruised through their contest against Hawthorn, winning by 62 points and solidifying their place in the top eight. That meant that it was a quieter day than usual for key defender Alex Pearce (Devonport), but he played his role perfectly in the win. He lost none of his four contested defensive one-on-ones, and he collected ten disposals and five intercept possessions. After a horror run of injuries Pearce has returned to the Fremantle lineup with aplomb, and his recent form has been a timely reminder of just how good he can be.

They looked shaky at times, but Geelong overcame a wayward Carlton outfit to claim a 26-point win at the MCG. As has become the norm, defender Jake Kolodjashnij (Launceston) was solid if unspectacular across the day, finishing with 14 disposals and four marks. He continues to bring pressure to the opposition, and he had four intercept possessions against the Blues to make a handy contribution once again.

St Kilda claimed a huge scalp in their quest for a finals berth, travelling to Queensland and beating the high-flying Lions by 32 points. After spending plenty of time stuck on the sidelines during his ten years in the AFL, Saints defender Jimmy Webster (Glenorchy) has quickly become one of their most consistent performers this season.

He kept Lions superstar Charlie Cameron to just five disposals and no goals, and he collected 19 disposals and eight marks of his own in a fantastic all-around display. Webster is now averaging 19 disposals and 5.4 marks per game in his last five outings, and he continues to get even better week by week. For the Lions, Grant Birchall (Devonport) made a rare appearance on the scoresheet with his first goal since 2019 and just the 35th of his career. He continues to be a reliable distributor from the Lions backline, finishing with 18 disposals used at an efficiency rate of 83% and seven marks. Teammate Mitch Robinson (Lauderdale) struggled to work his way into the contest, ending the evening with 13 disposals and two behinds. After starting the season on fire he has now had less than 15 disposals in three of his past four games. He remains a key player for the Lions, and it’s hard to imagine him not rising to the occasion as finals approach.

Gold Coast claimed a thrilling one-point win over the Giants in Ballarat, but the day ended early and in heartbreaking fashion for Hugh Greenwood (Lauderdale). A first-quarter collision saw him subbed out of the game with a knee injury, and coach Stewart Dew confirmed post-match that the club has fears that it is a torn ACL. That would be the end of Greenwood’s season, and he would most likely spend a chunk of 2022 on the sidelines. He has been a star in the Suns midfield since crossing over from Adelaide, and he currently sits second in the AFL for tackles and in the top 20 for stoppage clearances (seventh) and contested possessions (18th).

The Swans continue to rise up the ladder, with their win over the first-placed Bulldogs lifting them to just one win outside the top four. Defender Robbie Fox (Burnie) played his role once again in the win, finishing with 11 disposals, four marks and three tackles. His skillset was important against a diverse Bulldogs forward line, and the Swans were impressive in holding their opposition to eight goals for the game with no multiple goalkickers.

A stunning late comeback saw Collingwood overrun the Tigers and win by 16 points at the MCG. As has been the case for much of the season, Magpies forward Brody Mihocek (Burnie) was dangerous but wayward throughout, kicking one goal and three behinds. That dropped his goalkicking accuracy to 41.7% across the season, and while he has created plenty of chances he would be hoping to convert at a higher rate in the coming weeks.

From skillful snaps to big bags, crafty dribblers and more. Jack Riewoldt's journey to 700 career goals has been nothing short of impressive.

Enjoy a look back at some of the Tiger's best, thanks to @maccas 🙌 #imlovingit pic.twitter.com/7tJdDSLfAj

It was a disappointing night for the Tigers, but they still had something to celebrate as Jack Riewoldt (Clarence) kicked the 700th goal of his AFL career. He is the 24th player to reach the milestone, and only the fourth Richmond player alongside fellow Tasmanian Matthew Richardson. On the night, he was well held to finish with eight disposals, four marks and just the one goal. Fellow Tiger Rhyan Mansell (North Launceston) set a new career high with 15 disposals against the Magpies, and he used those possessions well at 80% efficiency. After some success in the VFL in recent weeks he looks set to be given a chance to solidify his place in Richmond’s AFL side.

North Melbourne claimed a stunning upset in a rare Monday night clash, travelling to Perth and beating West Coast by ten points. Once again, Tarryn Thomas (North Launceston) was named in North’s best players, and he continues to blossom as part of their young midfield group.

Oh my goodness, Tarryn Thomas is a superstar.

He finished with 19 disposals, five marks and four tackles, and his early goal in the first quarter helped to get the ball rolling for the Roos. West Coast brought plenty of physicality and Thomas was involved in a few skirmishes throughout the night, but he showed plenty of poise to keep his head in the game and contribute to the win. Fellow Kangaroo Aaron Hall (Hobart) was typically industrious throughout the night, collecting 24 disposals (20 kicks) and eight marks mostly in the backline. It wasn’t his most prolific game this season, but he had just one turnover compared to five intercept possessions in another impressive display.