Tasmanians in the AFL: Round 18 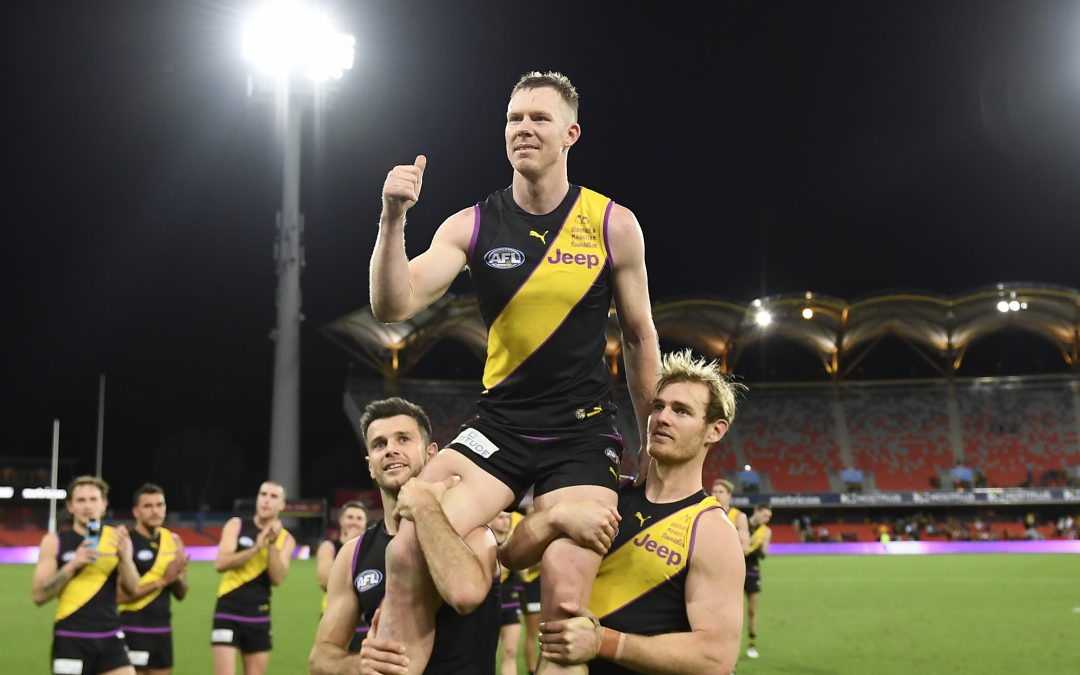 Geelong stayed within touching distance of top spot with a comfortable 69-point win over Fremantle on Thursday night. Cats defender Jake Kolodjashnij (Launceston) played his part in keeping the Dockers to just three goals, and he was used frequently as Geelong moved the ball out of defence. He finished with 12 disposals and a game-high 11 marks as the Cats controlled possession for most of the game. At the other end of the ground, Dockers defender Alex Pearce (Devonport) had a tougher time as he tried to slow down Geelong spearhead Tom Hawkins. Pearce battled hard throughout, but with little support around him he had just six disposals as Hawkins booted four goals.

Seemingly down and out after four consecutive losses, Richmond climbed up off the canvas with an upset 20-point win over Brisbane. The unquestioned star of the night was Jack Riewoldt (Clarence), who celebrated his 300th AFL game with a stunning performance. He kicked his first goal of the night in the opening quarter as the Tigers took the lead, and after Brisbane hit back before half time he booted three goals in the third quarter to spark a match-winning run. By the time the final siren sounded, he had six goals to his name from 14 disposals and seven marks, a remarkable effort on such a big occasion. After struggling for form at times this year, he now sits tied for second in the Coleman Medal race. Tigers teammate Toby Nankervis (North Launceston) was another standout, collecting 22 disposals from right across the ground and battling hard in the ruck with 25 hit-outs. His follow-up work at the stoppages has always been a strength, and he had a team-high seven clearances in another strong all-around display. Young defender Rhyan Mansell (North Launceston) continues to grow with every week, and he topped his career high for a second game running with 16 disposals against the Lions. They weren’t empty possessions either– half of them were contested, and he used the ball at 94% efficiency in another composed display.

The Lions slumped to a second straight loss, but that wasn’t through a lack of effort from Mitch Robinson (Lauderdale). He racked up 26 disposals and eight marks, winning plenty of his ball deep in defence as the Lions tried to hold off the flood of Richmond attacks. After four of his last five games with less than 15 disposals, it was a good bounce-back game for one of Brisbane’s most important players. It was business as usual for Grant Birchall (Devonport) as the veteran defender collected 17 disposals and used the ball at 82% efficiency. That is almost perfectly in line with his season averages, and his ball use has seen him remain a valuable player even at 33 years old.

Jimmy Webster from outside 50 🚀 pic.twitter.com/3xpWKVcv0N

The Saints came back to earth on Saturday afternoon, falling to Port Adelaide by 13 points in a tough loss. After playing a starring role in last week’s win over Brisbane, Jimmy Webster (Glenorchy) was excellent once again despite the loss. While most of his 22 disposals came in the back half of the ground, he snuck forward to kick the fourth goal of his career and his first since 2017. It was Webster’s third game in his last four with more than 20 disposals, and he made them count with seven intercepts and 86% disposal efficiency.

They may not have lost, but Melbourne would have surely come away disappointed after a draw with 17th-placed Hawthorn on Saturday night. They would have been happy to see Ben Brown (Glenorchy/Devonport) back on the scoreboard, as the big forward kicked his first goal since round eight. He could only manage one goal and two behinds against the Hawks but he again worked hard up the ground and finished with 12 disposals and six marks. Some wayward kicking cost the Demons, but their forward line seems to operate better when Brown is in their side.

North Melbourne gave Essendon an almighty scare before falling by 18 points, and young gun Tarryn Thomas (North Launceston) was again one of their best players. The 21-year-old has been in sparkling form this season since moving into the midfield, and he had 23 disposals, nine marks, seven tackles and a goal against the Bombers. His opening quarter may have been his best yet in the AFL as he racked up 11 disposals, five marks and two clearances before the first break. Thomas was trialled in a variety of roles when he first entered the league, and that seems to be paying off now as he is developing into an all-around star. Also named in North’s best players was Aaron Hall (Hobart) who continues to find plenty of the ball from the half-back line. He finished with 31 disposals and 14 marks against the Bombers, and he led the game in metres gained once again with 734, almost 200 metres more than the next player. While Hall has always been able to win the ball, his use and poise have improved this season in a new role.

Carlton have kept their finals hopes alive, using a stunning fourth-quarter burst to run away with a 29-point win over Collingwood. After missing last week’s game against Geelong with back soreness, Liam Jones (North Hobart) returned against the Magpies and was solid in defence. Nine disposals and six marks doesn’t sound like much, but he claimed nine intercept possessions and used the ball well at 89% efficiency. Collingwood forward Brody Mihocek (Burnie) was matched up on star defender Jacob Weitering for much of the game, and he battled hard in another solid performance. While he kicked just one goal he had 14 disposals and nine marks, and with six score involvements he found ways to make an impact on the game. The only concern came moments before the final siren when he copped a heavy bump and looked to be in some discomfort, but there has been no word from the Magpies on any injury yet.

The Crows battled hard but ran out of legs in the second half, slumping to a 42-point loss against West Coast. Young Crow Chayce Jones (Launceston) found the ball in the backline to finish with 15 disposals and four marks, but he struggled at times to make the most of that possession. He had five turnovers and used the ball at 47% efficiency as the Eagles brought plenty of pressure to the contest. Still, he is continuing to find his feet in defence and should continue to get better with time.

Sydney stormed home to claim a big win in round 18, overturning a 35-point deficit to beat the Giants by 26 points. Not generally a prolific ball winner, Swans defender Robbie Fox (Burnie) racked up 20 disposals in an impressive performance. That equaled his career high, set all the way back in round right of the 2018 season. His game also featured seven contested possessions and five intercept possessions, and he continues to contribute as the Swans surge up the ladder and into premiership contention.