Tasmanians in the AFL: Round 23 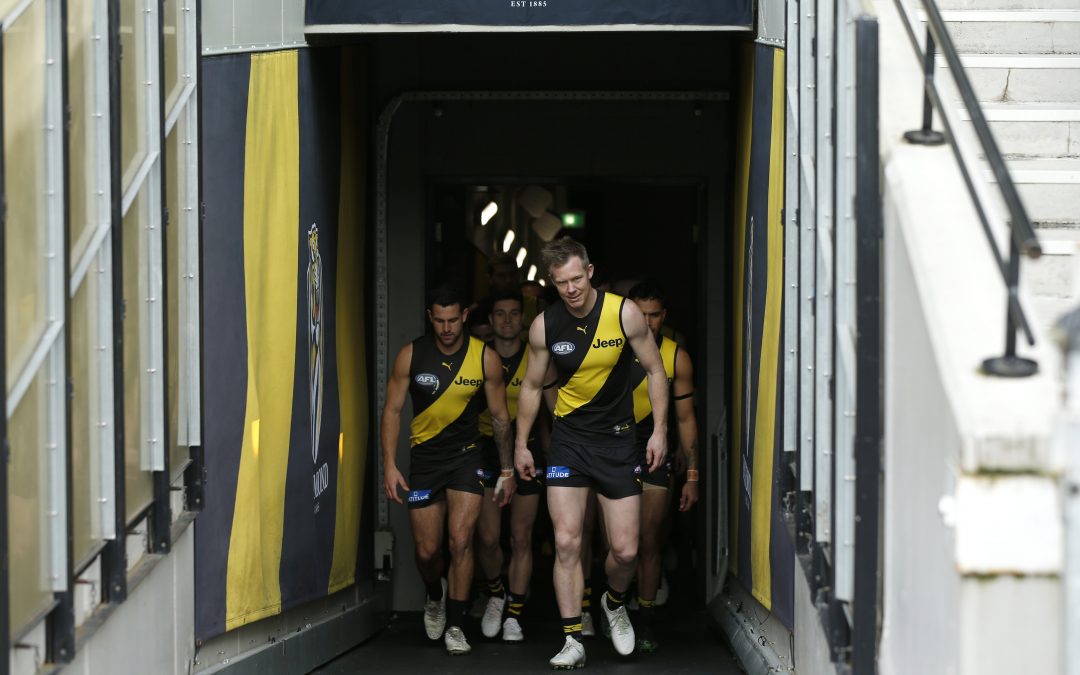 Richmond stormed home late against Hawthorn, kicking the last five goals of the game to snatch an unlikely draw at the death. On a day where several legends celebrated their last AFL game, it was Jack Riewoldt (Clarence) that stole the spotlight and starred late in the Tigers comeback. He finished with three goals from 12 disposals across the day, and his last two goals came in the final minute of the contest. The first was a clinical set shot from the boundary line that stopped the clock at 34 seconds, and the second was an opportunistic toe-poke out of traffic that somehow crawled over the goal line with just seconds left. That took his season tally to 51 goals, good for third place in the Coleman Medal in a tough season for the Tigers.

Sydney were far too strong for the Suns on Saturday, tuning up for the finals with an 87-point demolition. Swans defender Robbie Fox (Burnie) was left out of their starting 22, but he was prolific after entering the game as the medical sub. Inserted into the contest at three-quarter time, he racked up seven disposals in the last term, including two goal assists. It was an impressive burst from Fox, and it wouldn’t be a surprise to see him back playing the full game in week one of the finals.

A 38-point win may not look all that exciting, but Brisbane was playing for percentage against the Eagles and just barely snuck into the top four ahead of the finals. Once again, Lions veteran Grant Birchall (Devonport) was a steady contributor, finishing with 17 disposals and six marks in the win. He has been remarkably consistent through the home and away season, missing just one game and averaging almost 19 disposals per game, and his experience will be crucial as the Lions look to make a deep finals run.

The 2021 minor premiership came down to a kick after the siren, and it was Melbourne that finished on top after Max Gawn’s goal gave them a four-point win over Geelong. Before those late heroics, Ben Brown (Glenorchy / Devonport) played his part with another solid performance, finishing with two goals from nine disposals and five marks. The first came late in the opening term to give the Demons an early lead, and the other closed out the third term and was part of the match-defining run that ended in Gawn’s winner. Brown has now kicked 11 goals in his last four games, and he looks set to play a crucial role in Melbourne’s premiership chase.

For the Cats, defender Jake Kolodjashnij (Launceston) was industrious throughout, collecting 15 disposals and seven marks as part of their trademark possession chains. He used the ball well at 87% efficiency, and his mobility and size has seen him develop into a reliable defender. With Tom Stewart sidelined for the foreseeable future, he will be an important player as the Cats move into the finals.

St Kilda finished their season on a high with an impressive win, dominating from start to finish and beating Frematle by 58 points at Blundstone Arena. Playing his 19th game for the season, the highest mark of his career, Saints defender Jimmy Webster (Glenorchy) put in another impressive performance. His 18 disposals came at 89% efficiency, and he claimed a game-high nine marks along with eight intercept possessions. After struggling with injury throughout his career, Webster was finally able to enjoy some consistency and thrived in the Saints backline. Still just 28 years old, he looks to have plenty of good football left in him.

It was a tough day for Dockers defender Alex Pearce (Devonport) as he was constantly under fire from the red-hot Saints attack. He battled manfully throughout and finished with 12 disposals and five intercepts before leaving the game late with an apparent injury. Coach Justin Longmuir revealed post-game that Pearce had entered the contest with a sore heel and that his absence late was a precautionary measure. Pearce finished the season in good form after returning from another serious injury, and he will look to carry that into 2022.

In a game that was confirmed as a dead rubber before the first bounce, Essendon cruised into the finals with a 38-point win over Collingwood. Returning to the Magpies lineup after the birth of his first child, Jeremy Howe Dodges Ferry / Hobart) was a man inspired and was among Collingwood’s best players. He collected 20 disposals and six intercept possessions, patrolling the air in the Magpies backline and rebounding the ball with purpose. His importance to the Magpies was clear in his absences this season, and he would be hoping for a clean run of health next season as they look to rebound up the ladder.

The final game of the home and away season saw Adelaide end their year with a win, pulling away early and storming to a 44-point win over North Melbourne. Crows youngster Chayce Jones (Launceston) has thrived since moving into the backline, but he snuck further up the ground against the Roos and managed to hit the scoreboard. He booted a goal in the third quarter as the Crows continued to build their lead, and he finished with 11 disposals, three marks and four intercepts. Jones has improved drastically as the season has progressed, and he will be one to watch in 2022.

They may have lost the game, but North’s Tasmanian stars were outstanding once again. Aaron Hall (Hobart) was named as their best player on the day as he capped off an outstanding season with another strong display. He racked up 37 disposals, 28 of them kicks, and he led the game with a ridiculous 967 metres gained. Since moving into the backline and locking down his place in the team, Hall has been one of the most prolific ball winners in the AFL and one of the premier rebounding defenders. Teammate Tarryn Thomas (North Launceston) has emerged as a star in the midfield this season, and he closed out the year with one of his best performances to also be named in North’s best. His 27 disposals came from all parts of the ground, and his defensive work rate was on display with seven tackles and six intercepts. A goal late in the third quarter was the icing on the cake, and he had five score involvements across the game.