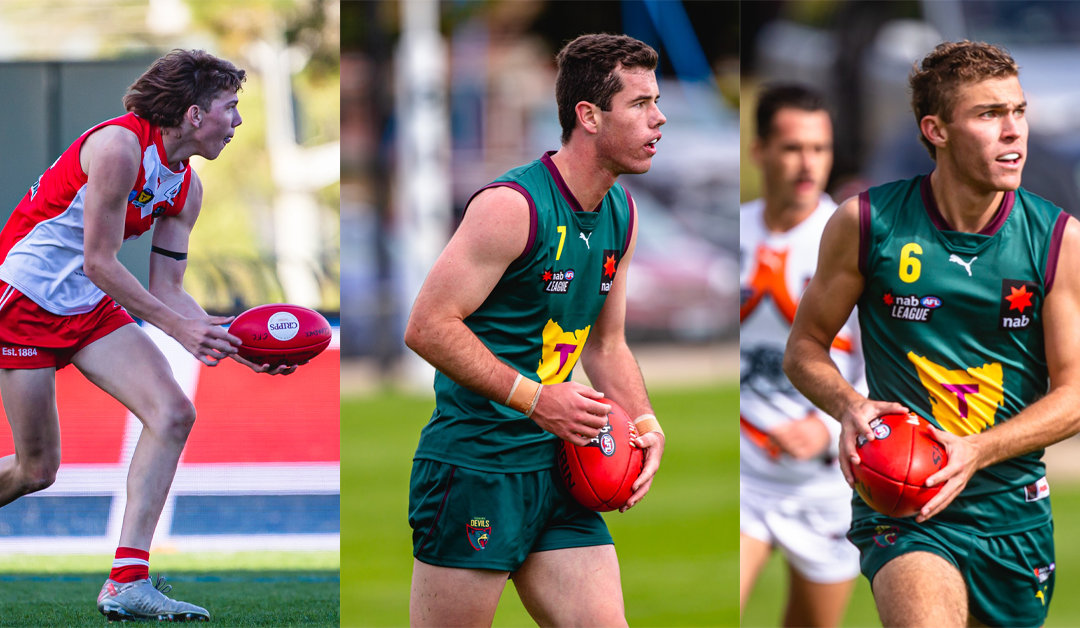 The AFL has released the names of 90 players invited to take part in the 2021 NAB AFL Draft Combines, with three Tasmanian players included.

Sam Banks (Clarence), Baker Smith (Clarence) and Will Splann (North Hobart) have all been selected to take part in this year’s combine testing. This will assess each player’s physical strengths through several tests including 20-metre sprint, agility tests and vertical jump.

All three players have enjoyed strong seasons in the NAB League with the Tasmania Devils, as well as with their respective clubs in the Tasmanian State League.

The captain of the Devils NAB League Boys side, Banks has bounced back from an early-season injury and continues to shine. A smooth mover from the half-back line that can also step into the midfield, he is a member of the AFL Academy and the Allies combined squad for the under-19 national championships.

Splann has emerged as a versatile tall this season, with a strong set of hands, plenty of footy smarts and the ability to play at  both ends of the ground. He dominated the Devils intra-program showcase game in attack and defence, and that form has carried over into the TSL with North Hobart where he recently enjoyed a five-goal haul in a win over Glenorchy.

Baker Smith is another talented tall that has shown his versatility this season. After playing predominantly as an intercepting defender for the Devils, he has been swung forward in recent weeks for Clarence in the TSL, kicking three goals in an upset win over Launceston a fortnight ago.

With the current situation relating to the COVID-19 pandemic seeing variations in restrictions across the country, the annual NAB AFL Draft Combines will be state-based combines in 2021. The three Devils selected will undertake their testing either at the Victorian combine on October 9 or in Tasmania, as dictated by COVID restrictions.

A total of 120 players will participate in the 2021 NAB AFL Draft Combines, with the remaining 30 players invited by the end of September.

In addition, the 2021 NAB AFL Draft Combine is scheduled for Wednesday September 29 and Thursday September 30 at Marvel Stadium in Melbourne for the top 60 players as identified by AFL Club recruiting staff. These players will be selected out of the 120 players and participate in medical screening and interviews with AFL Clubs.

AFL Clubs are asked to each select a list of their preferred players to attend the 2021 NAB AFL Draft Combine, with all invitees all receiving nominations from several AFL clubs.

AFL Talent Ambassador Kevin Sheehan said the National Draft Combine is an opportunity for players to showcase their physical ability before the 2021 NAB AFL Draft at the end of November.

“Although there have been various interruptions to State Leagues and Talent programs again this year, the AFL Clubs have seen enough potential to issue this initial list of 90 invitations to players from all regions of Australia,” Sheehan said.

“They are regarded as having the necessary potential to be contenders for the 2021 NAB AFL Draft to be held in late November. As the season concludes, a minimum of 30 additional players will be added for Combine testing as AFL Clubs consolidate their views on players of interest.”

“The 2021 version of the NAB AFL Draft Combine will look a little different, but we held similar events in 2020 with great success and it will provide all AFL Clubs a chance to assess players on their physical capabilities.”

“We are certainly very excited with the level of talent of this group of future stars for the AFL,” Sheehan said.