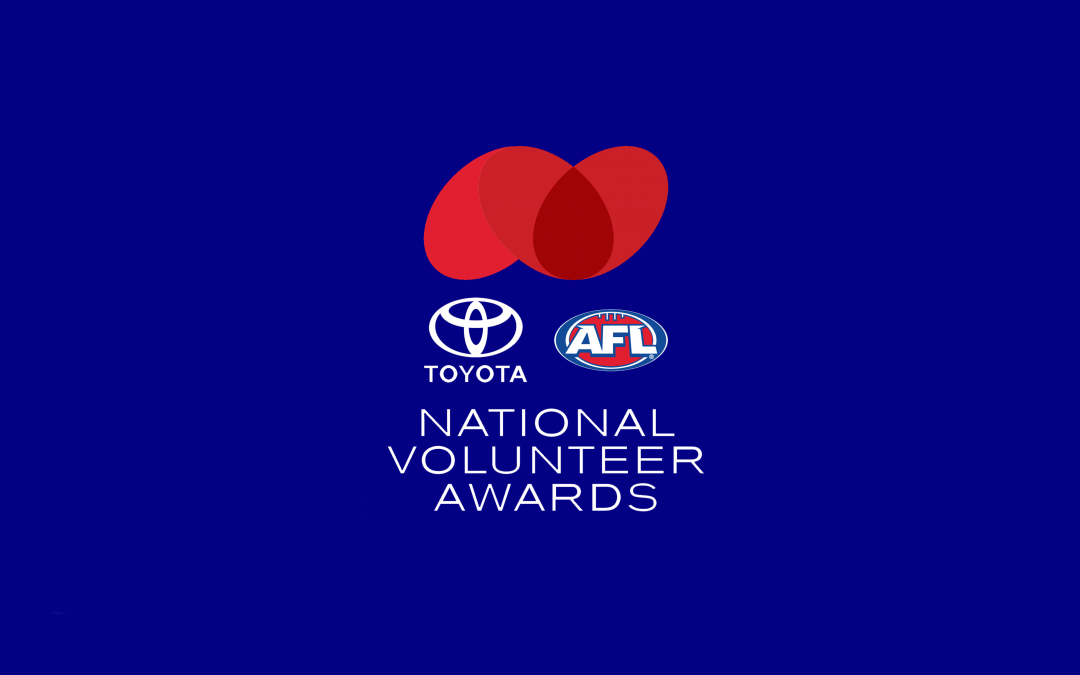 The AFL has announced the state and territory winners of the Toyota AFL National Volunteer Awards, with eight Tasmanians recognised for their contributions to the game.

All Auskick Centres, Schools, Community Clubs and Leagues were invited to nominate an outstanding volunteer as part of the Toyota AFL National Volunteer Awards. AFL received over 600 nominations nationally, recognizing the significant contribution our volunteers give to the game, right across the industry. From the pool of state and territory winners, a national winner will be selected in each category and these will be announced in mid-September.

Congratulations to the following Tasmanians that have been selected as the state winners in their category:

Known throughout the state for his impact on women’s football, Brad is a treasure and a major contributor to the growth of female participation in the sport. Now a retired school teacher, he would put more hours into the club than any occupation, and 100% voluntarily.

Formerly the Senior Women’s coach at the Kingborough Tigers, Brad has taken on a role across the entire women & girls program at the club with the primary aim of developing female coaches across six teams and a variety of age groups. This has evolved into strategic growth initiatives for girls football and he is now an assistant coach for all of those teams, attending training and games for each side. His initiatives have also seen three new females coaching these sides, all of which are showing tremendous aptitude. Importantly, the club has grown to house over 110 female participants, by far the most of any club in the state.

His contributions and capability were recently recognised when he was named as the head coach of the SFL Women’s representative team, and he led the side in the inaugural Women’s Statewide All-Stars Series earlier this year.


Damion has been involved with the umpiring association for more than a decade. In that time he has umpired at a level as high as the VFL, and locally he has been a huge contributor in the progression of junior umpires and assisting with their development.

Damion took on the role of goal umpiring coach a few years ago, and the group has flourished in the time since. Participation numbers are at a record high and the talent within the pool is exceptional, and that is largely thanks to Damion’s hard work at training, away from training and on game day. It is rare that Damion won’t see more than 12 umpires officiate on a weekend, and he ensures that everyone receives feedback on a very regular basis.

One goal umpire even says that if there was any other coach taking their group, they may not be there. He is described as “the most fair and reasonable coach” they have ever umpired under.


Damien works with several schools across the North West Coast, helping to deliver AFL programs into schools and allowing kids to experience football in a safe and inclusive environment.

His passion to grow the game and to help develop football in schools is immense, giving students the ability to enjoy the game when they may not have the opportunity elsewhere.

A Level 3 coach, Mitch is active in the state and offers his services in advancing coach education outside of his immediate club zone. He is a valuable contributor to the Level 2 Coaching Accreditation Courses. He has been active in coaching roles since his AFL playing days with Hawthorn.


Dwayne, better known as “Dipper”, always goes above and beyond in his work with the Ulverstone Football Club. He coaches a reserves team while also serving as the Auskick coordinator.

His first priority is always the kids that he coaches, but his service doesn’t just stop there. He has also umpired a number of senior games when there has not been an umpire available. He also coaches, umpires and volunteers for his sons basketball teams in the region.

He is known to never say no, even when his capacity to volunteer and assist has been restricted. Dwayne has been described by one Ulverstone local as “by far the best volunteer I’ve seen… I’m not sure how he manages to do it.”

Lindsay Dobson has given a lifetime of service to the Yolla Football Club in numerus roles over his 66 years at the club.

Lindsay first started at the Yolla Football Club in 1966 and has devoted an immeasurable amount of time since to the Red and Blue. Up until last year, Lindsay acted as Match Manager for Yolla and as stalwart of the club. Week in and week out he was responsible for all of the support roles at the club and the allocation of jumpers, among many other tasks he took on during game day.

This role at any club can be challenging at times, but Lindsay never missed a beat providing Yolla with any support and service they needed for 66 years. The amount of effort he has put in to the club and local football is massive, and Yolla president Terry Quinn says that they will be forever indebted to Lindsay and his family.

Lindsay has now retired, but he still sneaks away every Saturday and watches the games. A very quiet man that doesn’t like the limelight, Lindsay is a very deserving recipient of acknowledgment in the Tasmanian football community.

New Horizons is open to people with any disability (intellectual, physical, spectrum disorders, anxiety disorders and more), from ages 5 and up and their families. They run sport and recreation programs right across the state, and Suzanne Bowen has been an active volunteer with the organisation since 2007.

During that time, Suzanne has volunteered four hours every week assisting with admin in the organisation’s head office. She is also a staple at catering events and fundraising barbecues, where her pavlovas have become a hit with everyone in attendance. Suzanne always volunteers to help support, take attendance and assist with admin work in the organisation’s AFL, cricket and golf programs.

Suzanne is always the first to put her hand up, and her family are a great community family.

Graeme Gardner is president of the Rocherlea Football Club, and as a proud Palawa man he has championed a number of initiatives to support indigenous Australians around the game. Rocherlea was awarded a Community Club award in 2021 for its contribution to the Aboriginal community, and that is in large part thanks to Graeme’s tireless efforts.

Graeme initiated the NTFA’s Aboriginal Round in 2009, which is still held annually and is one of the biggest events on the Tasmanian football calendar. He has provided opportunities for local Aboriginal artists and performers to showcase their talent with jumper designs for these games, dance performances, public speaking roles and more.

Graeme has previously provided Welcomes to the Hawthorn, Port Adelaide and Fremantle Football Clubs, and he has initiated a relationship between Rocherlea and Hawthorn around a mutual support of the NTFA, Aboriginal Round and the AFL. He has also spearheaded efforts to provide an educational Aboriginal aspect into school football programs in the north of the state.

That only scratches the surface of Graeme’s work in the Rocherlea Football Club, the NTFA, and the wider community in the north of the state.