Around the grounds: September 4-5 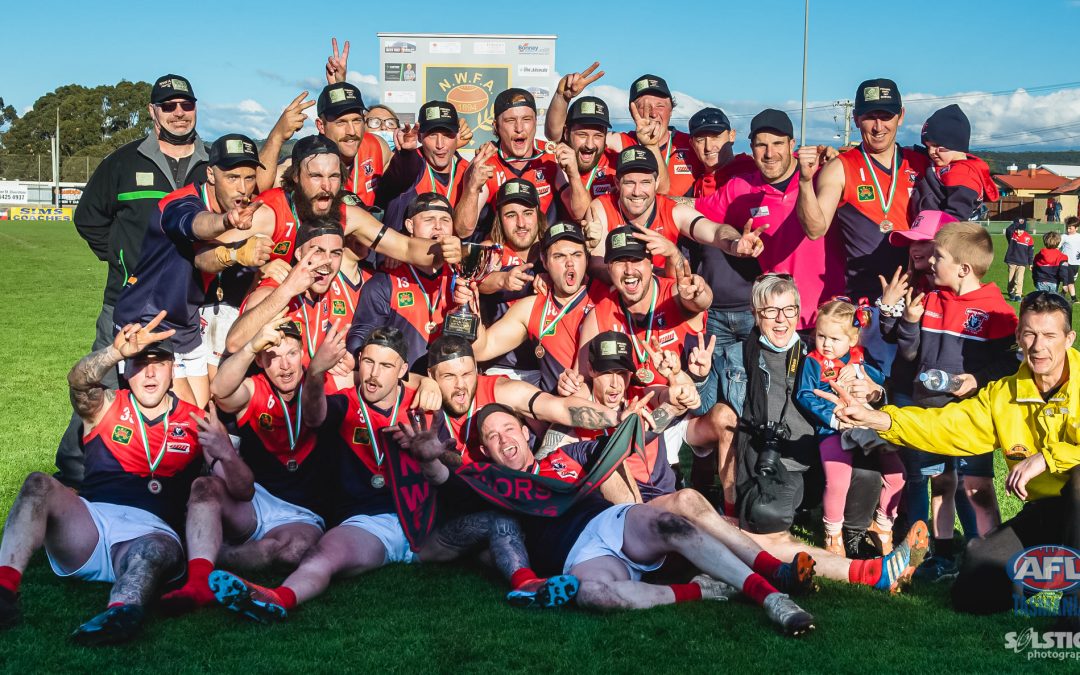 Catch up on the biggest results from across Tasmanian football, with a full list of scores from around the state below.

They were the two best sides in the NWFA all season, and Forth and Motton Preston faced off in a grand final epic. In the end it was Motton Preston that prevailed, as they held their nerve to win by ten points and claim the premiership. Forth started strongly when Kallan Williams kicked the first goal of the day, but the Demons responded to boot the next three and take an 11-point lead into quarter time. Motton Preston carried that momentum into the second and continued to build their advantage, with a five-goal-to-one quarter ballooning the margin to 32 at the main break. The contest was slipping away from Forth and a slow start to the second half may have ended their chances early, but they hit back emphatically and charged back into the contest. They added five goals of their own in the third quarter, headlined by two from Nathan Gore, and held the Demons to just one major as they cut the deficit to eight at the last change. Demons co-captain Claye Sculthorpe booted the opening goal of the term to give his side some breathing space, and they kept their noses in front despite two late goals from Forth to claim a ten-point win at the final siren. Motton Preston ruckman Jacob Foley was dominant throughout and was awarded the George Foster Medal as best on ground, and Sculthorpe was outstanding with five goals. 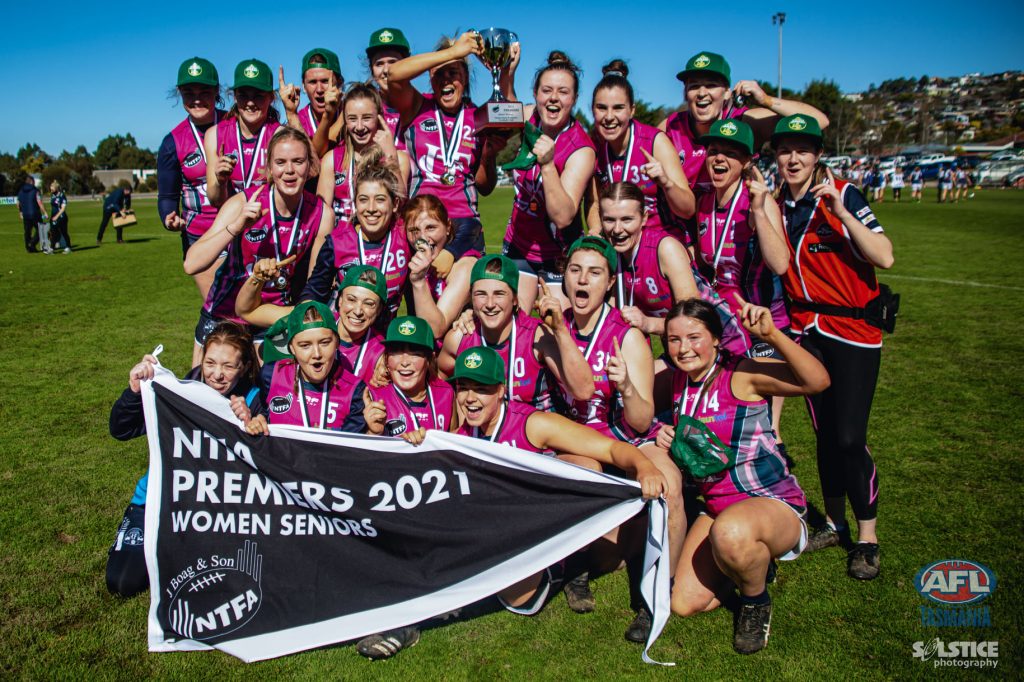 Playing their first season in the NTFAW, Launceston completed an undefeated campaign and claimed the 2021 premiership with a 25-point win over Old Launcestonians in the grand final. It was the first meeting of the season between the two sides after their earlier scheduled game was cancelled, and while Launceston started as favourites, OLs came into the day with seven wins from their last eight games. It was the minor premiers that started stronger, though, with Madison Shaw kicking the opening goal inside four minutes and adding a second shortly after. The Blues had their third with time still on the clock before the first break and threatened to kill the contest early, but the OLs defence stood strong late in the term to keep the margin close. That carried on into the second term as OLs worked their way into the contest, but neither team was able to break the game open and make inroads on the scoreboard. OLs added their first score of the day midway through the term but could only manage a behind, and despite spending plenty of time forward they were left ruing that missed chance when Launceston booted another goal to lead by 25 at half time. The OLs backline, led by Macenzi Lloyd and Jane Astbury, continued to battle as Launceston attacked in waves, and that saw both sides go through the entire third quarter goalless. OLs made one last push to open the final term, kicking back-to-back behinds and locking the ball forward, but they were unable to find a decisive goal as Launceston playing-coach Mikayla Binns and her fellow defenders stood tall. That saw the Blues hold their lead and claim the premiership medal at the final siren, with captain Dearne Taylor named best on ground. 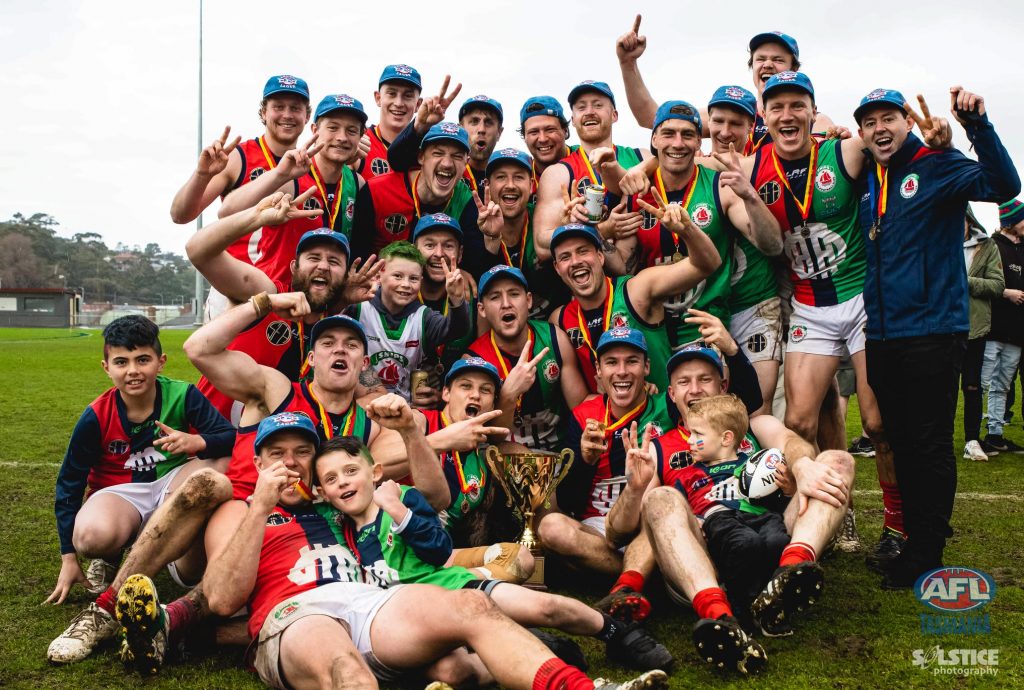 The OHA Ships are the OSFA premiers for the second consecutive year after claiming a hard-fought seven-point win over St Virgils in the grand final. The Saints started the better of the two sides, kicking the first two goals of the game and keeping the Ships goalless in the first quarter. OHA quickly steadied in the second term, though, and they exploded into action to boot the next five goals in a row and storm into the lead. A brilliant set shot in the dying minutes of the half gave St Virgils playing-coach Jaye Bowden his second goal and kept the Saints within touching distance, but they would be dealt a huge blow when Bowden was taken to hospital with concussion symptoms during the break. That opened the door for OHA to pull away once again, and they piled on five goals to none in the third term to take a 30-point lead into the final change. The Saints refused to go down without a fight, kicking two quick goals to open the fourth quarter and keeping pace with the Ships, and a Luke Potter set shot with more than 28 minutes gone pulled them to within seven points. That would be the final action of the game, though, as the Ships held on to claim the win and the premiership. Jarrod Lawler was awarded the best on ground medal, while Brodie Langford and Gabriel Chambers kicked two goals each to lead a balanced attack.

Queenstown claimed the 2021 DFA premiership in impressive fashion, winning every quarter of the grand final on their way to a 29-point win over Somerset. The Crows peppered the goals early with 11 scoring shots in the opening term, but they could only convert four goals to Somerset’s three and take a 12-point lead into the first break. The Kangaroos hit back early in the second term and dragged that margin back to three, but back-to-back goals from Queenstown’s Josh Newson saw the Crows skip away again at the long break to lead by 15. Both teams traded goals for much of the third quarter, but again it was Queenstown that found an extra gear to pull further in front. Sam Newsom booted three goals in the quarter, and at the final change the Crows led by 23 points and had one hand on the trophy. A pair of goals for the Kangaroos kept their hopes alive, but Queenstown had all of the answers and at one point stretched the lead to 40 points. Somerset hit the scoreboard late but it wasn’t enough, as Queenstown celebrated their premiership at the final siren. Queenstown’s Darcy Crane was awarded the Snooks Medal for best on ground, narrowly edging out Josh Newson who finished with five goals.

*Congratulations to Cameron Walter (Southern Storm) who kicked his 100th goal for the season.

Division One: Glenorchy vs Claremont Black

Division Two: University vs The Port