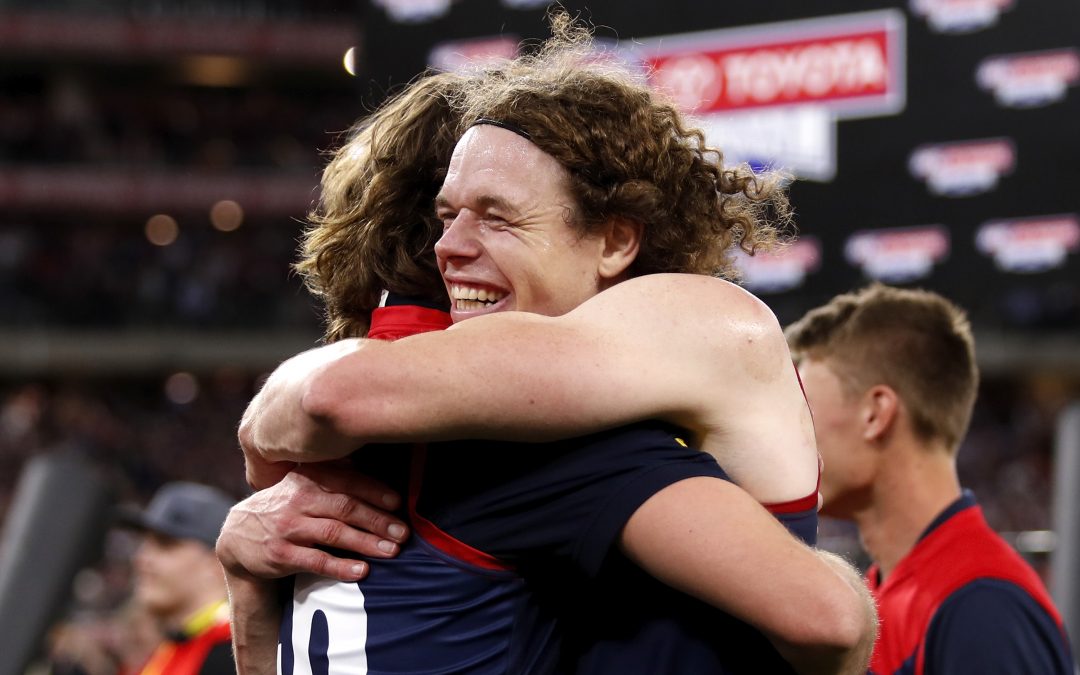 After a winding journey through Tasmanian football, the VFL and then onto the biggest stage in the AFL, Ben Brown earned the ultimate success on Saturday when his Melbourne Demons won the 2021 AFL grand final. It was a drought-breaking premiership for the Demons, their first in 57 years, and it was sweet vindication for Brown after a career with plenty of ups and downs to date.

Brown started his football career on the north west coast of Tasmania, playing for the Devonport Magpies and progressing through their junior ranks. He made his senior debut for the club in 2009 and played TSL football there until 2011, when he moved south and joined the Glenorchy Football Club. Overlooked in three successive AFL drafts, he relocated once again, this time to Victoria and the Werribee Football Club in the VFL. After a strong season with the Tigers he finally heard his name called on draft night when he was selected by North Melbourne in the 2013 national draft. After 130 games and 287 goals for the Kangaroos, he was cut loose by North and traded to Melbourne at the end of the 2020 season; twelve months later, he is a premiership hero for the Demons.

Even Saturday night’s grand final was something of a rollercoaster for Brown. He was prominent early, taking a mark inside 50 and looking dangerous in the first quarter, but he could only manage a pair of behinds on the scoreboard. He managed to hit the target for his first goal early in the second, but that was his only disposal in the term as the Bulldogs threatened to rip the game away.

As the Demons lifted, though, so too did Brown. He had seven disposals in the second half, all contested and used at 100% efficiency, and he had a huge impact on the scoreboard. His second goal of the game came in the middle of the Demons’ stunning burst to end the third term, as they booted seven goals in 17 minutes to pull ahead at the last change. With the game almost out of reach for the Bulldogs, Brown put the result beyond doubt just one minute into the final quarter, booting his third goal and starting another Melbourne avalanche that would see them win emphatically.

When it was all said and done, Brown had delivered in spades with three goals from his ten disposals. All four of his marks came inside 50, and he had eight score involvements. Most importantly, he and his teammates had medals around their necks and a premiership cup in their hands.

"He's been instrumental in our forward line and how it's been working."

Clayton Oliver speaks about Ben Brown's improvement this season and how he himself has changed his game in recent years.#9AFLSFS | Watch @Channel9 pic.twitter.com/8C4spIGmEG

It was the perfect ending to what has been a strong season for Brown, as he finished the year with 25 goals from just 13 games and became a key cog in Melbourne’s forward line. Again, though, it didn’t always look like he would get this sort of fairytale ending. “It’s absolutely surreal — I’ve had a very up and down last 12-18 months and to cap it off with this, I’m so thankful to be where I am,” Brown told AFL Media in the aftermath of Saturday’s win.

After crossing over from the Kangaroos at the end of 2020, Brown was dealt an early blow in his new home when he was forced to undergo knee surgery a month before the new season. That saw him miss the start of the AFL season before returning through the VFL with the Casey Demons. Seven goals in his first two games earned him a quick call-up to the AFL side in round seven, where he booted two goals in a win over his former side and three the following week against Sydney.

A goalless outing in round nine, though, saw Brown become the unlucky man to make way for returning star Luke Jackson. Interruptions to the VFL season made games sporadic as he returned to Casey, but his performances were mixed; a bag of five goals against Essendon was sandwiched between two games with a combined total of seven disposals and zero scores.

With Melbourne flying high near the top of the AFL ladder, there were suddenly no guarantees that Brown would return to their lineup. “I definitely had some mental battles, some mental hurdles to get over, and I probably could have gone one of two ways to be honest,” Brown said. “Thoughts about, am I up to it, can I get back to that level, definitely cross your mind.”

Even when he was recalled, he initially struggled to make an impact, held goalless in his return game against Port Adelaide in round 17. The Demons kept their faith, though, and were rewarded as Brown would kick at least one goal in every game from that point on. Working in tandem with fellow forwards Tom McDonald, Bailey Fritsch and Kysaiah Pickett, among others, Brown proved to be the perfect foil as the team charged through September.

When you can’t quite believe you just won a flag… 😅#AFLGF pic.twitter.com/ikXv99AusB

Despite playing in less than half of Melbourne’s games, Brown still ended the season ranked fifth on the team for goals and second for marks inside 50. Most importantly, he stepped up on the big stage, kicking six goals in the finals and helping the Demons to a famous premiership win.